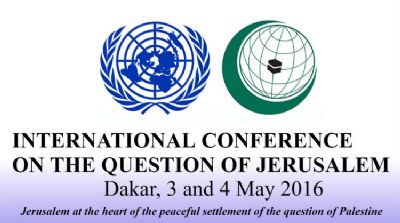 At a UN conference "on the Question of Jerusalem," invited speakers praised Palestinian terrorists as "martyrs" and legitimized the slew of stabbing, shooting, and car ramming attacks that have killed over 30 Israelis since October 2015. The conference, held in Dakar, Senegal on May 3 and May 4, 2016, was sponsored by the UN's Committee on the Exercise of the Inalienable Rights of the Palestinian People and the Organization of Islamic Cooperation. Here are some of the statements justifying Palestinian terrorism, analogizing Israelis to Nazis, and deemed worthy of distributing around the world via the UN's press release:

Ahmad Rwaidy, Former Chief of the Jerusalem Unit of the Palestinian Presidency: "Israel still refused to hand over the bodies of martyrs killed by Israeli security forces, he continued. 'What we need in Jerusalem is a scheme to support resilience,' he said."

Nur Arafeh, Policy Fellow at Al-Shabaka, the Palestinian Policy Network: "New Israeli plans for Jerusalem used urban planning as a geopolitical tool to constrain the urban expansion of Palestinians and Judaicize the city, she said... In that context, the current Palestinian uprising should be seen as acts of resistance and desperation against ethnic cleansing, forced displacement and economic marginalization... She held that the development approach should be rethought and embedded in the larger Palestinian liberation struggle against Israel's occupation and settler colonial regime."

"During the ensuing interactive dialogue... a representative of the Democratic League, noting Israel's 'disgraceful attempts' to exterminate the people of Palestine, said the time had come to 'take things up a notch' in Africa's support for the Palestinians."
Date
May 4, 2016
Title
UN Press Release on Second Day of “The International Conference on the Question of Jerusalem”
Original Source
http://www.un.org/press/en/2016/gapal1365.doc.htm
Attachment
Click here to view this document in MS Word/PDF format