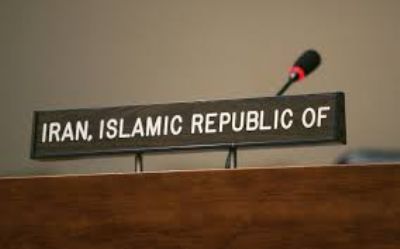 A placard for Iran at the United Nations
Iran prevented two organizations that criticize Iran's record on women's rights from being able to attend and participate in UN meetings and events. The NGO Women's Freedom Forum, has produced a critical report on human trafficking in Iran. The NGO Women's Voices Now screened three short films in 2016 focusing on the struggles of women in Iran.

Iran is one of 19 Member States on the UN NGO Committee, that considers applications for formal UN status. Organizations seek UN accreditation or official status because it permits them to attend meetings, to circulate documents, and on occasion to hold events inside the UN and address UN sessions. Members of the NGO Committee include countries that have little to no respect for freedom of speech or association and that continually hinder the operation of independent NGOs, such as China, Russia, Sudan, and Venezuela. Their standard operating procedure is to defer applications session after session with inappropriate, specious or repetitive questions and demands of the applicant NGO. After years of deferrals, Western states find that if they bring applications to a vote, they are simply outvoted in Committee.

On February 6, 2017, Iran managed to defer the Women's Freedom Forum's application â the seventh time its application has been deferred since June 2014 â by asking for "clarification on the reason behind focusing just on some countries" in the Middle East, as well as with a request for additional financial information. Iran deferred "Women's Voices Now," which had been deferred once before in June 2016, by asking for the criteria the NGO uses to select films for promotion and how it ensures they are not based on "false or fake reports" provided by "terrorist organizations."