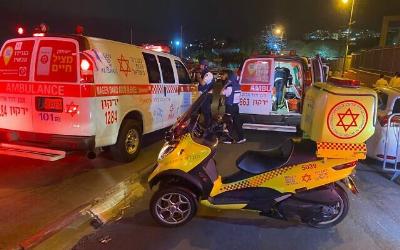 At least three people were killed and four others injured in a suspected terror attack in the Israeli city of Elad near Petah Tikva on the evening of Independence Day.

Police were investigating the background of the incident and according to reports, the victims were injured by two men, one wielding an ax and another with a gun, in two different locations including near Elad Amphitheater Park.

Checkpoints were deployed along the cityâs main roads while police searched by helicopter for a vehicle that was seen fleeing the scene. The Elad Municipality asked residents to shelter in place.

The attack comes during Independence Day evening, with many families gathering outdoors to celebrate the countryâs 74th anniversary.

Ahead of Memorial Day and Independence Day, the IDF announced a closure on the West Bank and Gaza Strip with the exception of humanitarian, medical and exceptional cases made with the approval of the IDFâs Coordinator of Government Activities in the territories (COGAT).

The attack in Elad comes as tensions have been high in Israel after a wave of deadly attacks has killed close to 20 Israelis.

The IDF has reinforced troops in the West Bank by 12 battalions for a total of 25 battalions in order to bring the current wave of violence to an end without further attacks. Last week the IDF announced the decision to recruit six reserve battalions in the coming weeks after a situational assessment.

The huge boost in troops allows the military to carry out offensive operations in the West Bank and deploy troops along the security fence in order to prevent Palestinians from crossing into Israel through holes in the fence.

With at least two of the attacks carried out by Palestinians who illegally crossed into Israel through holes in the fence, the IDF has already begun to dig trenches to prevent vehicles from crossing as well as additional defenses along the barrier.

The increase in troop deployment to the West Bank is expected to last until the end of the year.