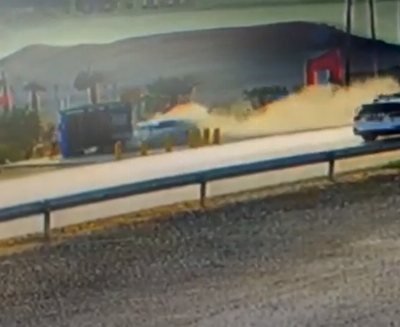 A Palestinian driver plowed his vehicle into Israeli soldiers at two locations south of the West Bank city of Jericho on Sunday afternoon, injuring five of them before being shot dead, officials said.

Police and the Israel Defense Forces said the Palestinian attacker first rammed into soldiers near Nabi Musa, then continued driving and slammed his car into a bus stop at the Almog Junction.

The Magen David Adom ambulance service said its medics were taking five victims, all in their 20s, to hospitals in Jerusalem.

Two were listed in moderate condition and the rest were lightly hurt, MDA added.

The IDF said troops fired at the attacker following the initial ramming near Nabi Musa, but he fled and plowed into a bus stop at Almog Junction, where he was shot by a police officer and another armed civilian.

The Hadassah Mount Scopus Medical Center said the attacker had been brought to the hospital in serious condition before he died several hours later.

The attack came hours after a Palestinian man carried out a deadly shooting attack near the West Bank settlement of Kiryat Arba on Saturday night.

In that attack, Muhammed Kamel al-Jabari, an apparent member of the Hamas terror group, opened fire at a Jewish father and son who had been shopping at a Palestinian-owned convenience store, between Kiryat Arba and the adjacent city of Hebron. He then left the scene by car and returned on foot several minutes later, and opened fire on medics and settlement security guards who arrived at the scene to help the pair.

Al-Jabari killed the father, who was later named as Ronen Hanania, and wounded four other people, one of them seriously â a medic. A Palestinian man was also among the injured.

In the predawn hours of Sunday morning, Israeli troops mapped out al-Jabariâs home â the first step before its potential demolition â in Hebron. The Israel Defense Forces said troops also detained al-Jabariâs brother over his suspected involvement in the attack.

The attacks came amid heightened tensions in the West Bank.

Another Israeli was killed in a suspected attack last month, and four soldiers have been killed in the West Bank in attacks and during the arrest operations.