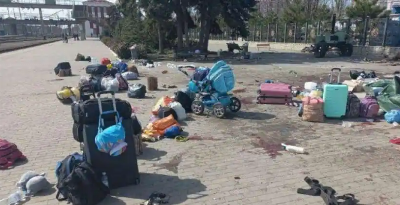 A missile strike on a train station in eastern Ukraine killed at least 50 people, including five children, according to Ukrainian officials who accused Russia of attacking a key evacuation hub.

The station in Kramatorsk was packed with people when the missile hit, said Pavlo Kyrylenko, the head of the Donetsk Regional Military Administration. He also said 98 more people were wounded, including 16 children.

Ukrainian President Volodymyr Zelenskyy said Russian forces hit the railway station with a Tochka-U missile. Kyrylenko previously said the missile was an Iskander, loaded with cluster munitions, though his later tweets also cited Tochka-U. NPR has not been able to verify the missile independently.

The Russian Ministry of Defense denied any involvement in the attack, calling reports of its responsibility "a provocation."

Earlier this week, Russian troops had retreated from areas near Kyiv and Chernihiv in northern Ukraine. They were believed to be regrouping in Belarus and in Russia for a refocus on eastern Ukraine, where Moscow has recognized self-proclaimed separatist republics in Donetsk and Luhansk regions. Ukrainian officials warned of new attacks on eastern areas, urging civilians from Donetsk, Luhansk and Kharkiv to evacuate. This week, railroad officials said rail services might soon be suspended from the Donbas region in the east, encouraging people to rush to trains.

"Not having the strength and courage to confront us on the battlefield, (Russian forces) are cynically destroying the civilian population," he wrote in Ukrainian. "This is an evil that has no limits. And if it is not punished, it will never stop."