U.N. Inaction on Turkey
All Actions of the UN Human Rights System Critical of Specific States, 2016 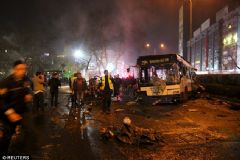 A huge explosion has hit the Turkish capital of Ankara killing 27 people and wounding at least 75 others, according to local media and a senior security official.

Several vehicles were destroyed or damaged in the explosion, which took place in the Guven Park near busy Kizilay square in central Ankara.

Gunfire was also heard after blast, while ambulances rushed to the area, officials said.

A local reporter said the blast took place where several bus stops are located in one of Ankara's main roads.

The Kizilay neighbourhood is a key commercial and transport hub close to a number of government agencies, embassies and parliamentary buildings.

NTV television said the explosion occurred as a car slammed into a bus, suggesting that the blast may have been caused by a car bomb.