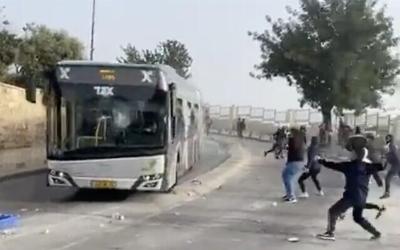 Hundreds of rioters were seen collecting rocks on the Temple Mount Sunday morning in an attempt to disturb the peace and block access to the site through improvised blockades. Police are working to keep the rioters away from the holy site to allow visitors to enter.

The Temple Mount has been opened to Jewish worshippers who arrived at the site under stringent conditions, with just a few dozen Jews allowed in at a time.

In a statement, the right-wing nongovernmental organization Im Tirzu said: "The policy of containment and maintaining the terrorists' freedom to riot on the Temple Mount is not working. The surrender to the terrorist authorities necessarily leads to an increase in additional terrorist events.

"Jews traveling by bus in the capital city on their way to the Temple Mount and the Western Wall should not be pelted with rocks. All those throwing rocks at buses should be treated as terrorist killers and punished accordingly. We demand the Israeli government open the Temple Mount to Jews and tourists without restrictions, and when there are rioters, to close it off to Muslims. Security must be restored to Jerusalem," Im Tirzu said.

The Israel Bus Drivers Association said, "The buses are a symbol of rule, and therefore the sons of Belial attack them and seek to interfere with routine life. The blood of passengers and drivers must not be forfeit."

In a statement, the Israel Police said: "Alongside visits to the mount, full freedom of religion will continue to be protected for the worshipping public.

"The Israel Police will continue to act against lawbreakers and rioters to maintain peace and public security."

Online, calls were issued for Palestinian youths to continue to flock to the Al-Aqsa Mosque.

The Higher Islamic Council in Jerusalem called for a "general enlistment" across Palestine in support of Al-Aqsa, while the Palestinian Authority's Jerusalem Governor Adnan Ghaith claimed Israel was perpetrating terrorism against worshippers.

Hamas said, "The Palestinian people will foil the occupation's plans" and held Israel responsible for the "settlers' invasion of the mosque plaza and its defilement."

On Friday, over 300 rioters were arrested on the Temple Mount. According to Palestinian media reports, over 90 people were wounded in the clashes.

A series of Arab states, including Saudi Arabia, Jordan, Egypt, the United Arab Emirates, and Bahrain, sharply condemned the events on the Temple Mount.

The Emirati Foreign Ministry emphasized the need to exercise self-restraint and protect worshippers. It called for Israeli authorities to respect Palestinians' religious rights and halt practices that harm the sanctity of the mosque.

Israeli security forces stopped an attempted terrorist attack in Beit El in the Binyamin region on Saturday morning, according to a Channel 13 report.

A 21-year-old Palestinian from the village of Silwad was spotted trying to scale the settlement's fence with a knife at around 11 a.m. The security coordinator and the community's chief of staff arrived at the scene and fired a warning shot in the air.

The suspect was taken for questioning by the Shin Bet security agency and told investigators that he had planned to carry out a terrorist attack, according to the Channel 13 report.

The attempted attack comes at a time of increased tensions between Israelis and Palestinians following a series of terrorist attacks that killed 14 people and ongoing counterterrorism operations in the West Bank in response to the terror wave.

For the first time in 33 years, the Jewish holiday of Passover is overlapping with the Muslim Ramadan and the Christian holiday of Easter.

The Israeli military lifted a closure on border crossings into Israel from the Palestinian territories overnight Sunday.