U.N. Inaction on Cameroon
All Actions of the UN Human Rights System Critical of Specific States, 2017 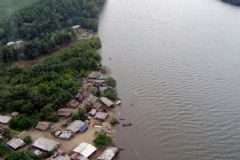 Nigeria's parliament is investigating reports that 97 fishermen have been killed in the Bakassi peninsula, which the country ceded to Cameroon.

Reports say that the killings happened last week when a Cameroonian paramilitary unit was enforcing a $300 (Â£230) fishing levy.

Cameroon took control of oil-rich Bakassi in 2008 after an International Court of Justice ruling, ending years of border skirmishes.

Survivors of the attack have been arriving back in Nigeria with injuries, reports the BBC's Naziru Mikailu in the capital, Abuja.

Nigeria's lower house of parliament resolved that it will investigate the reports in view of the 2005 Green Tea agreement between the two countries, to protect the citizens of the ceded areas from harm.

A five-year UN-backed transition period was put in place exempting the area's residents, many of them Nigerian fishermen, from paying tax.