U.N. Inaction on Cameroon
All Actions of the UN Human Rights System Critical of Specific States, 2019 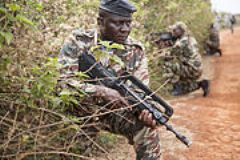 Cameroonian forces have killed at least four civilians during security operations in one of the country's anglophone regions in the past month, according to a human rights organisation, including two men with disabilities.

An uprising by separatists that began two years ago and the response by security forces have caused intense suffering in the anglophone regions of the former German colony, which was carved up by France and Britain during the first world war.

Members of the Cameroonian air force killed a 20-year-old man with a mental disability, shooting him in the chest in his home, and a construction worker they had stopped, forced off his motorbike, stripped and dragged on the road, according to Human Rights Watch. Both alleged killings took place on 11 July in the Alachu neighbourhood of Bamenda, the capital of the north-west region, researchers said, adding that residents were too frightened of the authorities to register complaints.

In a separate incident, a group of at least 20 soldiers killed an elderly disabled man and raped a woman on 21 June, residents of Kumbo, the second-largest city in the region, told Human Rights Watch. Gunfire caused most residents of the area to flee but the man, who was thought to be in his 80s or 90s, did not hear well and could not run, according to the residents.

"He had hearing problems, so he didn't hear the shooting. The military entered his home and killed him in the kitchen. He was shot in the stomach," one said.

The woman said five soldiers broke into her house and asked her the whereabouts of the "Amba boys" â the popular name for separatists. When she said she did not know, they allegedly beat her.

"A soldier asked a colleague for a condom and told me to go toward the toilet. He followed me with a gun. He said, 'If you scream or say anything, I will kill you.' He raped me and left. When I went back home, I found that all my money had been stolen."

Soldiers also killed a nurse in Bamenda on 4 July, shooting her in the neck in a possible act of retaliation for the killing of a soldier by separatists near her home, according to Human Rights Watch. Her 15-year-old sister, who was severely wounded, is still receiving treatment, they said.

"These latest crimes add to a long string of abuses by Cameroonian security forces," said Human Rights Watch's Lewis Mudge. "Instead of seeing that justice is done, Cameroon's authorities deny that their forces are killing and raping people."

The picture is similar across both anglophone regions of the central African country. In May, in the south-west region, the parents of a baby killed in her grandfather's house went into hiding, fearing for their lives after accusing government forces of shooting her.

Swiss officials said last week they had been mediating in the conflict for several months.

It is extremely difficult for journalists and human rights workers to access the anglophone regions of the central African country. Last September, the prominent Cameroonian journalist Mimi Mefo was arrested and imprisoned after reporting that the American missionary Charles Wesco had been killed by security forces. She was released after an international outcry.

Recently Sky News journalists were taken on a tour of the anglophone regions by the Cameroonian military, but as they interviewed purported former separatists, armed soldiers stood behind them, listening in.

Human Rights Watch's researcher Ilaria Allegrozzi was denied entry to Cameroon in April despite holding a valid visa, in what the organisation called "an attempt to curb reports of abuse by security forces".