U.N. Inaction on Yemen
All Actions of the UN Human Rights System Critical of Specific States, 2010 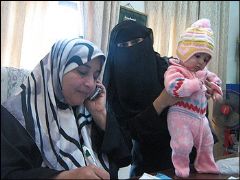 Arwa Elrabee, a gynecologist, speaks on the phone as Rihab al-Askari, 17, waits with her son, Haitham, 1. Askari's parents forced her into marriage at age 13. When that marriage failed, she was wed again, at 15. (Sudarsan Raghavan/the Washington Post) Source: The Washington Post

SHUEBA, Yemen - A 13-year-old Yemeni child bride who bled to death shortly after marriage was tied down and forced to have sex by her husband, according to interviews with the child's mother, police and medical reports.

The girl's mother, Nijma Ahmed, 50, told the Associated Press that before her daughter lost consciousness, she said that her husband had tied her up and forced himself on her. "She looked like she was butchered," she said about her daughter's injuries. Elham Assi, 13, bled to death hours after she spoke to her mother and just days after she was married to a 23-year-old man. She died on April 2 in the deeply poor Yemeni village of Shueba, some 200 kilometers northwest of the capital. Her husband, Abed al-Hikmi, is in police custody.

The practice of marrying young girls is widespread in Yemen where a quarter of all females marry before the age of 15, according to a 2009 report by the country's Ministry of Social Affairs.

Traditional families prefer young brides because they are seen as more obedient and are expected to have more children.

Legislation to ban child brides has been stalled by opposition from religious leaders. There has been no government comment over the case.

The girl - one of eight siblings - was pushed into marriage after an agreement between her brother and her future-husband to marry each other's sisters to avoid having to pay expensive bride-prices - a common arrangement in Yemen, the poorest country in the Middle East.

According to police notes from the interrogation of the husband, he was upset because he could not consummate their relationship and felt under pressure to prove his manhood.

Assi's mother said she also tried to persuade her daughter to have sex with her husband so as not to shame the family.

Al-Hikmi took his young bride to a nearby medical clinic, asking a doctor there to administer her tranquilizers so she would not resist his advances. The clinic said it refused.

Al-Hikmi then obtained performance enhancing pills, according to the police interrogation, and that night completed the act while she screamed.

The next day, he returned to the same medical clinic carrying Assi because she could not walk.

"I told him not to go near her for at least ten days," said Dr. Fathiya Haidar. She said Assi's vaginal canal was ripped.

A forensic report obtained by the AP showed that Assi's injuries were much more extensive, including extensive tearing around the vagina and rectum, suggesting that there might have been additional intercourse after the clinic visit.

Her mother said she visited Assi later that day, where she found her daughter fading in and out of consciousness.

"She whispered in my ear that he had tied her up and had sex with her violently," she said. "I said to her husband, what have you done, you criminal?"

She said al-Hikmi told her that the young bride was just possessed by spirits and said he would take her to a folk healer to cast them out. Hours later, Assi was dead.

"She asked me to stay beside her," her mother said.

The practice of marrying young girls is widespread in Yemen and has drawn the attention of international rights groups seeking to pressure the government to outlaw child marriages.

"Early marriage places girls at increased risk of dropping out of school, being exposed to violence, abuse and exploitation, and even losing their lives from pregnancy, childbirth and other complications," said UNICEF's regional director Sigrid Kaag, in a statement Wednesday condemning the death.

A February 2009 law set the minimum age for marriage at 17, but it was repealed and sent back to parliament's constitutional committee for review after some lawmakers called it un-Islamic. The committee is expected to make a final decision on the legislation this month.

The issue of Yemen's child brides received widespread attention three years ago when an 8-year-old girl boldly went by herself to a courtroom and demanded a judge dissolve her marriage to a man in his 30s. She eventually won a divorce.

In September, a 12-year-old Yemeni child-bride died after struggling for three days in labor to give birth, a local human rights organization said.