U.N. Inaction on Zimbabwe
All Actions of the UN Human Rights System Critical of Specific States, 2021 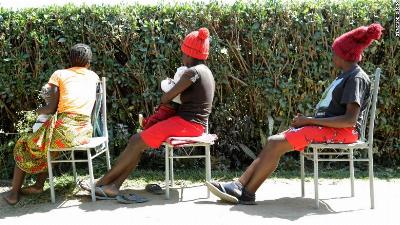 Teen mothers in Zimbabwe tell of a life of abuse and hardship once they are married off.

Faith and her other teenage friends sit outside in the bright sun while waiting for their Taekwondo session to start in Epworth, a township southeast of central Harare.

Her son and the babies of other teenage mothers play together in the dirt while the mothers wait for their instructor.

They speak in low tones about the circumstances that led to the death of 15-year-old Anna Machaya during childbirth in July. (Previous media reports had misidentified her as Memory Machaya, 14)

"I heard of her death with great shock. What if it were me? I feel lucky to be alive because I gave birth in the house. Anything could have happened," Faith said.

Faith and other child brides CNN spoke with did not want their names revealed for fear of being ostracized for speaking out.

Machaya died while giving birth in July at Johanne Marange Apostolic Church shrine, Zimbabwe's police said in August. She was married to one of the church's members 26-year-old Hatirarami Momberume.

CNN has been unable to reach his lawyers.

Her death has sparked an outcry in Zimbabwe. A petition against child marriage has garnered thousands of signatures, and many campaigners hope her case will expose the practice of child marriage which is outlawed in the country but has continued, despite the threat of legal action.

Momberume is facing rape charges, while her parents have been charged with obstructing the course of justice for allegedly providing false identification documents to the police concealing her real age, Nyathi said.

Authorities allege that Machaya's parents, Edmore Machaya and Shy Mabika, also promised to give a 9-year-old to Momberume.

"Our investigations have shown that people involved are not opening up, and they are trying to sweep things under the carpet, particularly on what activities could be taking place in that church," Nyathi told CNN. Alice Mabika, speaking on behalf of Anna's family, declined to comment when contacted by CNN about the incident.

"I have been asked not to comment on this issue until the investigations are done," she said.

The government has typically turned a blind eye to the practice of child marriage. Zimbabwe has two sets of marriage laws, the Marriage Act and Customary Marriages Act. Neither law gives a minimum age for marriage consent, while the customary law allows polygamy.

A church under scrutiny

The practice of child marriage is widespread in townships and rural Zimbabwe, where most of the country's poor live, and where parents often say they're forced to give away their young daughters in marriage to reduce the burden of their upkeep.

The Apostolic church has also come under scrutiny as young girls are encouraged to marry older men, for "spiritual guidance," according to Girls Not Brides.

"Child marriage is rampant in Zimbabwe, especially among Indigenous apostolic churches, an evangelical group that mixes Christian beliefs with traditional cultures and has millions of followers across the country, " HRW said in a post.

Nyasha Marange, a spokesperson for the Johanne Marange Apostolic Church where Anna died, said the church did not allow marriage involving children under 18 years and denied that its members were abusing minors.

"Our leaders have been preaching against that," Marange told CNN.

"We excommunicate any member who engages in such behavior. It is a criminal offense and should be dealt with at the courts like in Momberume's case," he told CNN.

He said that the teenager died in the shrine owned by the church but not inside the church premises. According to him, the Zimbabwe government banned church gatherings to prevent the spread of Covid-19 and that regular church services have not been held since.

The shrine is where members perform prayers and receive spiritual instruction from the church leader. It is said to be sacred as it carries spiritual power, according to the church authorities.

Marange added that the church cooperated with police and church members helped in finding Momberume when he allegedly went into hiding following her death.

Parents rarely report cases of abuse to the police for fear of "embarrassing" the church, according to Zimbabwe Council of Churches general secretary Kenneth Mtata.

"At the moment, we have many cases where sentencing seems not to be happening, and many people get away with it," Mtata said.

The Covid-19 lockdown last year has led to an increase in teenage marriages, campaigners told CNN.

Many schoolgirls were forced to stay at home, which saw child marriage increase, according to Natsiraishe Maritsa, whose initiative is teaching teenage mothers self-defense lessons in Epworth, one of the poorest townships in southern Harare.

"Most school-going children have nothing to do because schools are closed. That is pushing them into early marriages," Maritsa told CNN.

"We haven't had an update yet, but in rural parts of Zimbabwe, the pregnancies are not going down as expected. We are still compiling the data, and hopefully, we can see the scale. Men should stop this behavior," she said.

She also called on authorities to take action against churches abusing teen girls.

A life of pain and penury

Early marriage and a lack of qualifications often condemn young girls to a life of pain and penury.

Faith told CNN her parents forced her to marry a 26-year-old man after dropping out of school at 15.

She says she's lost all hope of ever going back to school. Faith's husband works at a gold mine and the couple often do not see each other for weeks. What they both earn from their low-paid jobs can barely sustain the family.

"I survive by doing menial jobs. It is hard to get soap to wash my child's clothes. This is a tough life," she sighed.

Spiwe 17, is a friend of Faith's. She told CNN she got married at 15 after her parents divorced.

Arimuzhu makes less than $2 a day doing laundry and other house chores for the city's middle-class workers. She says her 9-month-old son often goes hungry. "Life is just difficult," she said.

Rutendo looks on soberly as Arimuzhu narrates her story. She is worried and pensive.

The 16-year-old is pregnant and says she's yet to register for ante-natal care at the local clinic. The teenager says her husband works at a gold mine, and their combined wages are not enough to keep them afloat.

Mungai says her husband often beats her when they argue over the family's meager finances.

"Whenever I complain of hunger, he gets angry," she said her voice cracking. "There is no peace in the home."