U.N. Inaction on Congo
All Actions of the UN Human Rights System Critical of Specific States, 2008 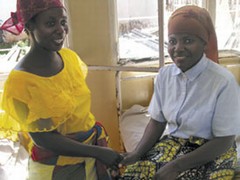 GOMA, Congo- "Intense fighting between government and militia forces in eastern Congo has led to a surge in rape by fighters from all sides, women and doctors say.

"I was leaving the market and I ran into FDLR on the road. They robbed me of everything and then four men raped me," Francoise Mwamasirika, a 45-year-old mother said of Rwandan Hutu rebels who include leaders of Rwanda's 1994 genocide against Tutsis.

Mwamasirika was stunned and barely able to speak when she arrived at a hospital in the South Kivu town of Minova. "I won't go back," she said.

Sexual violence has escalated as hundreds of thousands of people have been forced to flee the safety of their homes -- around 400,000 people since August, when Nkunda quit a peace deal, bringing North Kivu's displaced population to 800,000.

Congo's government has called a peace summit for Sunday, but there is little optimism the chronic fighting will end soon.

Christophe Kimona, a surgeon at Goma's Heal Africa hospital, repairs the torn and damaged genitals of rape victims. Many can no longer control urination without surgery.

"The number of women we are seeing who have been raped is going up. We see an average of three or four rapes each day," Kimona said. "Those are just the ones who arrive at the hospital, we don't know how many are too ashamed to come."

Most rape victims say their attackers were armed groups of rebels or government soldiers.

But Kimona said as rape becomes so common with the conflict, more civilians are committing rapes too, and the victims are often children.

Villagers found Chaunce covered in grass, dirt and blood after she was raped by a 22-year-old man in her village, Noela said.

"I took her to the local hospital for surgery to repair her torn vagina, but it became infected and I had to bring her to Goma to have another operation and to heal that infection."

Now Noela says she is eager to go home.

"I just want to return to my other children because with the war, I'm not sure they are safe," Noela said.

There are laws in place to try rapists but victims often have little faith in the judicial system, said Marie-Antoinette Okimba, a senior field officer with U.N. refugee agency UNHCR.

"Many believe there is nothing that can be done -- especially if they were raped by military," Okimba said.

Okimba says some women are raped on the outskirts of refugee camps when they go looking for firewood.

Dr. Kimona says while he can repair many of the women physically, as long as the war continues, the women have little protection.

"We take care of them, but then you have people who leave and are raped again because society is not safe," Kimona said."