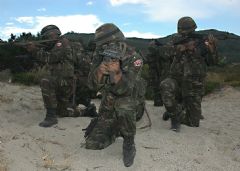 In the month since Turkey intervened to drive US-allied Syrian Kurdish fighters from a broad swath of northern Syria, proxy forces backed by Ankara have been blamed for a growing ledger of abuses against the local population, residents say, undermining Turkey's stated goal of creating a "safe zone" for civilians.

More than 200,000 people have been internally displaced by the Turkish-led offensive, according to the United Nations.

Families that have been scattered across eastern Syria say that Turkey's Syrian Arab proxies have carried out summary executions and beatings, kidnapped or detained their relatives and looted their houses, businesses and belongings.

In the month since Turkey intervened to drive US-allied Syrian Kurdish fighters from a broad swath of northern Syria, proxy forces backed by Ankara have been blamed for a growing ledger of abuses against the local population, residents say, undermining Turkey's stated goal of creating a "safe zone" for civilians.

More than 200,000 people have been internally displaced by the Turkish-led offensive, according to the United Nations.

Families that have been scattered across eastern Syria say that Turkey's Syrian Arab proxies have carried out summary executions and beatings, kidnapped or detained their relatives and looted their houses, businesses and belongings.

The SDF had spearheaded a US-led campaign against the Isis militant group in northeastern Syria. But Turkey had long viewed the SDF's presence near the border as a threat because of ties to a Kurdish separatist group in Turkey, the Kurdistan Workers' Party, or PKK, which the Turkish and US governments have designated a terrorist organisation.

Turkey essentially delegated the ground offensive to a proxy force, the Syrian National Army, an umbrella group in northern Syria consisting of an assortment of rebel forces opposed to the government of Syrian president Bashar al-Assad.

Many of the group's factions, made up largely of Syrian Arab fighters, had already fought at Turkey's behest in two previous military operations over the past three years.

It is the Syrian National Army that many residents blame for depredations against civilians that have driven thousands out of the area.

A senior officer affiliated with the force acknowledged some human rights violations but said the SDF was exaggerating the abuses.

Among the displaced is Fateh, a 38-year-old barber from the border town of Ras al-Ayn in northeastern Syria.

As an Arab of Turkish origin, he was among those who could have been expected to support the incursion. But in a telephone interview from the north-central Syrian city of Raqqa, where he and his family fled, he expressed loathing for the Syrian National Army.

"Those people are filled with hatred and a lust for blood," said Fateh, speaking on the condition that his full name not be used for fear of reprisals.

"They do not distinguish between Arab and Kurdish, Muslim and non-Muslim. They contacted me before the offensive and said that as an Arab Muslim, it is my duty to rise up against the Kurds and help Turkey invade my city."

A supporter of the SDF and its diplomatic and administrative wings, Fateh rejected the outreach and joined his Kurdish friends in fleeing Ras al-Ayn.

Mohammad Aref, a radiologist from the border town of Tal Abyad, said he also received a phone call, this one threatening.

"Someone called me and simply said 'we want your head', as if stealing my home and driving me out of my city merely for being Kurdish was not enough."

Mr Aref, who is now in Kobane, about 35 miles west of Tal Abyad, said this incursion reminded him of when Isis invaded his town in 2013.

Syrian National Army members "destroyed a lion stonework at the entrance of our building, thinking it was idolatry", he said. "They took our carpets and threw them on the street to prostrate themselves on them during public prayers that they were holding."

The offensive also displaced Mikael Mohammad, the Kurdish owner of a clothing shop in Tal Abyad. He and his family are now in Raqqa, crammed with three other families in a one-bedroom apartment that was abandoned by its inhabitants.

Mr Mohammad said relatives who did not make it out of Tal Abyad have told him that families of fighters from the Isis, who had escaped from a nearby internment camp, now occupy his building.

"Each one of those mercenaries acts as if he was in charge of the town," Mr Mohammad said of the Syrian National Army fighters.

"They walk into houses and proclaim them theirs. They kidnap and execute people for being 'atheists' or 'blasphemers'. And they are looting people's properties in broad daylight."

For a Syrian Kurdish aid worker from Ras al-Ayn, "the best scenario a Kurd can wish for is not being allowed to go back home".

Syrian National Army fighters "believe that taking your life is doing God's work and that stealing your property is their reward for it," said the displaced aid worker, who now lives in Qamishli, a city about 65 miles east of Ras al-Ayn, and who spoke on the condition of anonymity out of fear for his safety.

The fighters' criminal behaviour thrives in the absence of Turkish forces, the aid worker said.

"When the Turks are around, their Syrian mercenaries refrain from looting property or harming anyone," he explained. "The Turks are aware of such human rights violations, and they try to limit them, but not hard enough."

Speaking to journalists recently, Turkish president Recep Tayyip Erdogan defended his Syrian rebel allies, saying they were not "terrorists" but Islamic holy warriors who were "defending their land there, hand in hand, arm in arm, shoulder to shoulder with my soldiers".

A deal brokered by Moscow and Ankara on 23 October effectively ceded SDF-held territory to Turkey â a stretch 75 miles wide and 20 miles deep, from Tal Abyad to Ras al-Ayn.

The same group has also been accused of murdering Hevrin Khalaf, a Syrian Kurdish politician, after ambushing her car south of the town on 12 October.

In response to the backlash, the Syrian National Army formed a committee tasked with investigating crimes allegedly committed by the group's members. The committee is chaired by Colonel Hassan Hamadeh, deputy defence minister in the opposition's Syrian Interim Government.

"We admit that we have soldiers who commit human rights violations," Col Hamadeh told The Washington Post. "The Syrian National Army's lack of homogeneity renders the task of disciplining everyone harder. It's like we're patching torn clothes."

However, he dismissed most of the accusations that have been circulating online, describing them as part of an SDF-led slander campaign. He did not specify which charges he views as specious.

"With these false accusations, they want to portray us as savage beasts," Col Hamadeh said. "Such rumours have caused many people to flee their cities and villages before we liberate them."

For displaced people such as Fateh and Mohammad, the abuses are more than rumours.

"Four armed men in military fatigues walked into my brother's minimarket in Ras al-Ayn, picked up cigarettes and other things and then refused to pay for them," Fateh recounted.

"When he insisted that they pay, telling them that he has children to feed, they beat him up and smashed the display windows of his storefront."

He described what is happening in northeastern Syria as tantamount to ethnic cleansing.

"Turkey now speaks of protecting the local population and conferring power to local councils in the areas it has captured," Fateh said.

"What local councils? There are no real local councils when the local population is uprooted and driven out in an attempt to change the demographics of the area."