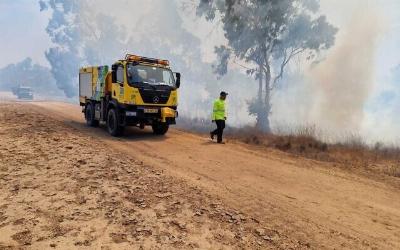 Terrorists in the Gaza Strip sparked at least nine fires in southern Israel throughout Monday with balloon-borne incendiary devices flown over the border as tensions in the region heated up, Fire and Rescue Services investigators said.

Firefighters from Fire and Rescue Services, the Israel Defense Forces, the Jewish National Fund and local communities have been battling brushfires throughout the day in the Eshkol and Sdot Negev regions of southern Israel.

Fire and Rescue Services investigators said they determined that at least nine fires in Eshkol were sparked by these balloon-based attacks. Another fire in Sdot Negev was also likely the result of arson, but this was still being checked, the investigators said.

The attacks drew harsh criticism from local government officials, who called on the government to take action.

âThe audacity of the terror groups to renew the terrorism of balloons and to burn our fields must be rooted out today. If it is not stopped today, we will find ourselvesâ¦ [again] putting out fires and crying that our harvests have gone up in smoke,â the mayor of the Eshkol region, Gadi Yarkoni, said in a statement.

âI expect the government to act immediately to send a clear and unequivocal message to these terrorist organizations that they ought not continue with this despicable terrorism,â Yarkoni said.

Recent days have seen a major rise in tensions along the Gaza border, with the potential for renewed clashes between Israel and terror groups in the Strip following Mayâs 11-day conflict, known in Israel as Operation Guardian of the Walls. This has largely been driven by demands from Hamas and other terror groups in Gaza for Israel to allow additional funds and goods into the beleaguered enclave. Jerusalem has refused unless Hamas releases two Israeli civilians and the remains of two soldiers from captivity.

There appeared to be a breakthrough in the stalled indirect negotiations between Israel and Hamas last week, when Qatar and the United Nations announced that they had created a new mechanism for moving aid into the Gaza Strip that Defense Minister Benny Gantz said would prevent the money from reaching Hamas. On Monday, however, Palestinian terror groups announced plans to continue holding demonstrations along the border, including one on Wednesday.

According to schedules published by Hamas-aligned media, buses will transport demonstrators from across southern Gaza to participate in the rally. The event has dubbed by its organizers âThe Sword of Jerusalem Shall Not be Sheathed,â a reference to Hamasâs name for the May battle between Gaza and Israel.

On Saturday, Hamas organized a similar large demonstration on the Gaza border that turned particularly violent at one point, with hundreds of rioters storming the security fence. A Palestinian man with a pistol opened fire at an Israeli Border Police sniper, Barel Hadaria Shmueli, who was stationed on the border, shooting him in the head and critically wounding him.

Forty-one Palestinians were also injured during Saturdayâs clashes, two of them critically, by Israeli gunfire and riot dispersal weapons, according to Hamasâs Gaza health ministry.

In response to the shooting attack on the border guard, the Israel Defense Forces conducted limited airstrikes on Hamas weapons storage sites in what was widely seen as an effort to retaliate to the attack on the soldier without risking a larger conflict with the terror group.

During the strikes, Palestinians fired heavy machine-gun fire at Israeli aircraft over the coastal enclave. A number of homes and vehicles in Sderot were hit by the gunfire and suffered damage.

âAs usual, the Zionist occupation, by bombing resistance sites, is seeking to cover up its own failure and dismay at the steadfastness and persistence of our people and their valiant resistance,â said Barhoum.

For months, Israel and Hamas have held indirect negotiations to set the terms for a new status quo. In the aftermath of Mayâs fighting, Israel has maintained heightened restrictions on Gaza, significantly limiting imports and exports and complicating the reconstruction of the battered enclave.

Prior to the conflict in May between Israel and Gazaâs Hamas rulers, the flow of funds from Qatar was considered vital to maintaining relative calm between the Jewish state and the Islamist terrorists.

Under the new arrangement announced on Thursday, Qatar and the UN will channel $100 benefits for 100,000 impoverished Gazan families â $10 million in total â each month through the UN and the UN World Food Program, Qatari envoy to Gaza Mohammad al-Emadi said in a statement.

Israel has fought four large campaigns against terror groups in the Strip since Hamas took control of the area in 2007, along with dozens of smaller exchanges of fire.