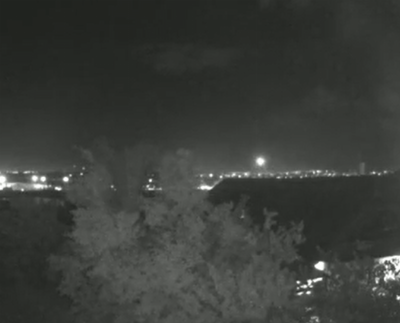 A rocket fired from the Gaza Strip on Wednesday evening landed in the southern city of Sderot, causing slight damage, officials said.

It was the second rocket fired by terrorists in Gaza at Israel since Monday. The Israel Defense Forces only confirmed that a rocket was launched from the Hamas-run coastal enclave, without explaining why the Iron Dome air defense system was not activated to intercept it.

Footage from the scene showed damage to a car and a wall, as well as what appeared to be part of the rocket. âPolice sappers are handling the item in order to safely remove it from the scene,â the Israel Police said in a brief statement.

The rocket apparently landed outside of the city, but a large section of it ricocheted and impacted near the home. According to Hebrew-language media reports, hundreds of ball bearings that were loaded into the rocket were found at the scene.

Four people were being treated for anxiety, including a 70-year-old man who was taken to a hospital, but there were no physical injuries, according to the Magen David Adom ambulance service.

Incoming rocket sirens also sounded in the adjacent towns of Ibim and Nir Am, near the border with the Strip. The Shaâar Hanegev regional council said there was no change in instructions for residents.

The rocket was launched at the tail end of a tension-filled day in Jerusalem, where Israeli nationalists were prevented by police from marching on the Old Cityâs Damascus Gate, where Palestinians converge for Ramadan. Hamas, the terror group that rules the Gaza Strip, had threatened to attack if the march went ahead.

There was no immediate claim by any of the Gaza-based terror groups for the rocket fire on Wednesday and on Monday, though Mondayâs attack was blamed on the Palestinian Islamic Jihad by several media reports.

Following Mondayâs rocket, the IDF said that it bombed a number of targets, including a site used by Hamas to manufacture weapons in the Gaza Strip.

In the past, Israel has responded with airstrikes against Hamas sites regardless of the identity of the group launching the attack. More rarely, it has directed its response at Islamic Jihad, if the terror group claimed responsibility.

The last few days have seen violent clashes between Palestinian rioters and police on the Temple Mount in Jerusalem, leading to the injury of dozens of Palestinians and several police officers.

Hamas and other Gaza-based terror groups have repeatedly invoked the flashpoint holy site as a red line. Police actions to quell riots there last year were among the triggers of an 11-day war in Gaza last May.