U.N. Inaction on Zimbabwe
All Actions of the UN Human Rights System Critical of Specific States, 2007 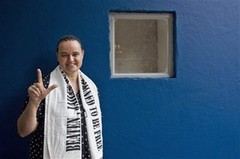 "Jenni Williams, one of the founders of Women of Zimbabwe Arise, or WOZA, gestures as she poses for a portrait ahead of a press conference in Johannesburg, South Africa, Tuesday Oct. 9, 2007. Williams has been arrested about 30 times and is reported to be on a hit list by the country's Central Intelligence Organisation. Women in Zimbabwe have been subjected to abuse and torture by police and security forces, with some women being forced to strip naked in custody, beaten on the breasts and detained while with their babies, according to a report released Tuesday."
Source: Peter Dejong, AP Photo

"Female activists in Zimbabwe have been beaten and forced to strip by police and detained while with their babies, according to one of Zimbabwe's civil rights organizations.

Women of Zimbabwe Arise released results of a preliminary report Tuesday showing that 73 percent of an initial sample of 397 members have been arrested more than once, 40 percent were tortured, and 50 percent detained longer than the allowed 48 hours. About 26 percent were injured badly enough to receive medical treatment."

WOZA, formed in 2003, has become a powerful voice in the deepening economic and political crises in Zimbabwe. It has held more than 100 peaceful protests and is known for its annual Valentine's Day march in which red roses are distributed in a call for love, peace and harmony.

"Women of WOZA have often been the target of unprovoked attacks," said Jenni Williams, one of the founders of the organization. Williams has been arrested about 30 times has been living in safe houses for the last three years. International organizations such as Amnesty International have made similar assessments about human rights in Zimbabwe under President Robert Mugabe.

"These types of violations have become commonplace in Zimbabwe as the government seeks to prevent Zimbabweans from protesting against the continuing devastating mismanagement of the economy, extensive and malicious corruption and a total disregard for the well-being of Zimbabweans," Williams said.

Comment from Zimbabwe police was not immediately available. An official at the Zimbabwean Embassy in Pretoria, who would only give his name as P.T. Chigiji, said he could not comment as he had not seen the report.

Williams said the report was done to highlight the violent conditions that still exist despite reports about progress being made in talks between Mugabe's ruling ZANU-PF party and the opposition.

South African President Thabo Mbeki, appointed by the Southern African Development Community to lead the mediation efforts, said last week that the negotiations were going well that there had been agreement that the elections would be free and fair.