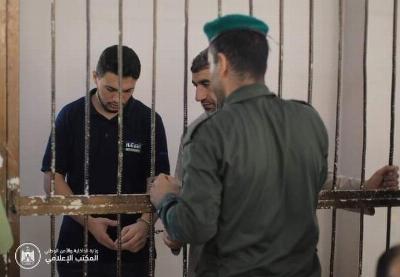 Hamas executes 5 Palestinians in Gaza, including 2 for âcollaboratingâ with Israel

The Hamas terror group announced on Sunday that it had executed five Palestinians in the Gaza Strip, including two for âcollaborationâ with Israel.

âOn Sunday morning, the death sentence was carried out against two condemned over collaboration with the occupation (Israel), and three others in criminal cases,â Hamas, which rules Gaza said in a statement.

It added that the defendants had previously been given âtheir full rights to defend themselves.â

Hamasâs interior ministry provided the initials and years of birth of the five executed Palestinians, but did not give their full names.

The two executed over âcollaborationâ with Israel were two men born in 1978 and 1968.

The older of the two was a resident of Khan Younis in the south of the blockaded Gaza Strip. He was convicted of supplying Israel in 1991 with âinformation on men of the resistance, their residenceâ¦ and the location of rocket launchpads,â Hamas said.

The second was condemned for supplying Israel in 2001 with intelligence âthat led to the targeting and martyrdom of citizensâ by Israeli forces, the statement added.

The three others executed on Sunday had been convicted of murder, the statement said.

Sven Kuehn Von Burgsdorff, the European Unionâs ambassador to the West Bank and Gaza, expressed concern over the executions.

âExecutions are cruel and inhuman and can under no circumstances be justified as they deny the victims human dignity,â he said in a statement.

âDeath as government-sanctioned punishment is a barbaric practice that has no place in the modern world,â he wrote on Twitter.

Hamas takes a rigid approach toward alleged collaborators with Israel. The Jewish state, along with Egypt, has put the enclave under blockade since the terror group took power in a bloody coup in 2007. Israel says the blockade is a necessary measure to limit the ability of Gazaâs terror groups to arm themselves.

Palestinian law requires approval from the Palestinian Authority president for the death penalty, but Hamas in Gaza has carried out executions without permission from Mahmoud Abbas.

According to July figures from Israeli rights group BâTselem, Hamas had by that time sentenced 13 people to death since the beginning of the year, but not carried out any executions. The last executions Hamas carried out, according to BâTselem, were three in 2017.

The international community has repeatedly criticized Hamasâs use of the death penalty.