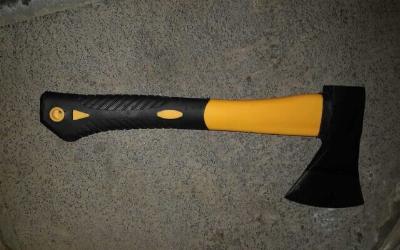 Axe carried by Palestinian suspect arrested by police in the West Bank, May 16, 2022. (Israel Police spokesperson)

A Palestinian who was armed with an ax and had a note saying he intended to carry out a terrorist attack was arrested by police at Tapuah junction in the West Bank on Sunday night.

The suspect, 22, from El-Bireh, traveled around the area for about an hour, looking for Israelis standing alone to attack them with the ax, the police said.

The IDF detained eight other Palestinians suspected of terrorist activity on Sunday night, with soldiers operating in a number of locations throughout the West Bank as part of Operation Break the Wave.

Suspects were detained in Tulkarm, Beitunya, El-Bireh and Yamun, the IDF said. In Yamun, Palestinian gunmen fired at soldiers. No soldiers were wounded.

âThe vigilance of the police and the pursuit of contact apparently prevented a major attack,â said Haim Sargrof, the areaâs police commander. âWe will continue with determination and professionalism together with the other security forces to protect the security of Israeli citizens everywhere and at all times.â

âWe thank the security forces and the police for their determined activity day and night to protect the citizens of Israel,â he said.

â[On Sunday night], a major attack in Samaria was prevented. Yet it is impossible not to tell the truth. At the end of the day, a war on terrorism is not just the capture of terrorists at intersections but offensive activity and eradication of terrorism in cities and villages.â

âWe see videos of dozens of terrorists demonstrating and supporting terrorism, carrying weapons unhindered,â Dagan said. âThe government should instruct the military echelon to launch âDefensive Shield 2â and not just to use tweezers against terrorists. We are tired of funerals; we look forward to a real war on terrorism.â

On Sunday night, an Israeli man was attacked by a mob and lynched in Isawiya, a neighborhood in east Jerusalem. Paramedics transferred the victim, 43, to Hadassah-University Medical Center in Jerusalemâs Mount Scopus. He was fully conscious and in stable condition, Magen David Adom said.

âAccording to passersby, he was wounded after being attacked when he entered the neighborhood, and pepper spray was even sprayed on him,â United Hatzalah paramedic Shadi Shauer said. âI gave him first aid, and then he was taken to [the hospital].â