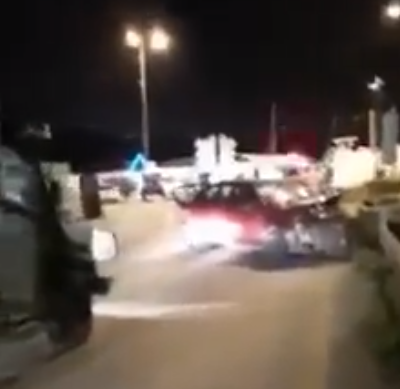 An IDF combat soldier was moderately injured in a car-ramming attack near the settlement of Neveh Tzuf in the West Bank on Tuesday, the IDF said.

Magen David Adom (MDA) paramedics treated the 19-year-old soldier, who was rammed on Road 465 outside of Neveh Tzuf.

The attacker was identified as 29-year-old Muhammad Nazmi Yassin from Bilâin village, near Ramallah, N12 reported. A photo of the terrorist was shared on social media by Palestinian news outlets.

Yassin accelerated towards IDF soldiers guarding the area and managed to hit the soldier, who suffered a leg injury as a result.

An Israeli Air Force (IAF) helicopter was rushed to the scene of the attack to transport the soldier to Hadassah-University Medical Center in Jerusalem. The attacker was also rushed to the medical center in the same helicopter, according to N12.

The terrorist was caught by IDF forces and will be interrogated.

Videos and photos shared by Palestinian media showed the smashed vehicle following the attack, as well as the IDF's arrest of the terrorist.

The Neveh Tzuf car-ramming attack is the latest in a series of terrorist attacks carried out over the last few months in Jerusalem and the West Bank.

Last month, Palestinian gunmen killed Yehuda Dimentman and wounded two others in the West Bank. Two days later, A 38-year-old Israeli was lightly injured in a stabbing attack in the West Bank city of Hebron.

The attacks were not contained to Jerusalem and the West Bank. On December 29, an IDF-hired contractor working on the Gaza border fence was shot and lightly wounded.