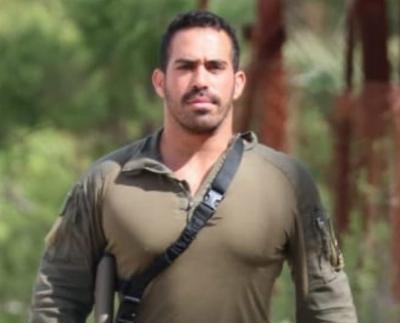 Deputy commander of the Nahal Reconnaissance Battalion Maj. Bar Falah was identified as the IDF officer killed in an exchange of fire with two armed Palestinian gunmen near the village of Jalma, north of the West Bank city of Jenin.

The incident began around 11:30 p.m. when IDF observation soldiers identified two suspects approaching the fence along the seam line near a military post. The suspects, who were not identified as being armed, reached within 15 meters of the fence and lay down.

Forces were sent to flank the suspects and approached within several meters. A Zik drone was scrambled to the area but was not used. The forces split into two in an attempt to surprise the gunmen, who then opened fire on the IDF first.

âThe whole encounter happens a few meters from the terrorists, that at this point we didnât know that they were armed, but they were definitely acting suspicious,â said Judea and Samaria Division Commander Brig.-Gen. Avi Bluth.

At around 2:30 a.m. the two terrorists opened fire on the IDF force, fatally injuring the officer.

According to Bluth, the officer was able to fire toward the gunmen before he was hit.

âThe force was a very skilled force that had been in the area for quite some time and carried out very challenging operations including the home demolition of a terroristâs house,â Bluth said.

The force, he said, prevented an attack âsince they were close to an IDF position. It could have been an ambush that the terrorists planned against the position or against a patrol that was set to pass through that point.â

"Unfortunately last night we lost an IDF officer in an operational activity against Palestinian terrorist operatives," said IDF Chief of Staff Lt.-Gen. Aviv Kohavi on Wednesday morning. "This is yet another expression of the challenges the IDF faces in all arenas and the security that it provides for the citizens of Israel, sometimes at a heavy price. I convey my deepest condolences to the family, and to his girlfriend."

Following the confirmation of Falah's identity, Prime Minister Yair Lapid responded to the news, saying that "there are no words to console the family, spouse and friends for the loss of the dearest of them all.

"A warrior who fought terrorism with all of his might and led his fighters until the last hour. The operational activity in which he was killed thwarted a major terror attack and saved human lives."

"I would like to express my sorrow and offer my condolences to the family of an IDF officer who was killed today in an incident in Samaria, his friends and his loved ones," he said. "The officer led the force as expected, bravely, to protect the citizens of Israel.

The two gunmen were identified by Palestinian media as Ahmed Abed and Abdul Rahman Abed, from the village of Kafr Dan near Jenin. One of them was an intelligence officer of the Palestinian Authority Security Forces.

Tensions rise in the West Bank

Tensions have spiked in the area in recent weeks as the IDF has increased its pressure on the northern West Bank with nightly arrest raids and other counter-terror efforts including continued work on closing the Seam Line to prevent Palestinians from illegally crossing into Israel.

According to Bluth, only a few hundred Palestinians cross the fence daily, down from some 30,000 that crossed before the IDF began work on the fence in June.

The Israeli military focused on the northern West Bank cities of Jenin and Nablus, where the majority of terror attacks have originated. Violent clashes, many times with heavy gunfire leveled at forces, are becoming an almost regular occurrence during the raids.

Over the five months since the operation began, over 2,050 counterterrorism operations were carried out, during which over 1,500 wanted individuals were apprehended and hundreds of weapons seized. More than 90 Palestinians have been killed by IDF fire.

Israel has come under heavy criticism for its open-fire regulations, including by the United States, due to the high number of Palestinian fatalities and after Al Jazeera journalist Shireen Abu Akleh was killed covering an IDF operation in Jenin in May.

But there has been a sharp increase in shooting attacks against IDF targets as well as civilian vehicles by Palestinian gunmen.

The incident came several hours after an engineering vehicle belonging to the Defense Ministry was fired upon near Jalma, but according to Bluth it is still unclear whether the two events were related.

âWe are after eight or nine incidents of gunfire along the fence, including shooting attacks from villages adjacent to the fence,â Bluth said, adding that all troops deployed along the fence are aware that they could be targeted.

âWe are no longer in the days of sitting in chairs along the fence, all positions are behind concrete barriers. When suspicious movements are detected, troops go behind the barrier and fire a shot in the direction of the movement as well as in the air as part of the arrest procedure,â he added.

IDF Spokesperson Brig.-Gen. Ran Kohav told reporters that the military will continue with its operational activity in the West Bank âwithout interruption.â

While the military âacts with restraint in order not to create excessive friction, we will not compromise in countering terrorism. We will continue to break the wave [of terror] and fight for our homes, along the seam line, and deep in enemy territory and wherever else it is required.â