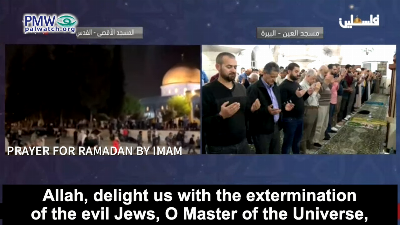 In a prayer that aired on Palestinian Authority TV last week, an imam called for âthe exterminationâ of the Jews.

The prayer was made during a Ramadan service in the Al-Ain Mosque in El-Bireh, near Ramallah in the West Bank, according to the Washington-based Palestinian Media Watch watchdog, which provided an English-language translation to a video clip of the broadcast.

âGrant us victory over the infidels,â the imam chanted, according to PMW. âAllah, delight us with the conquest and liberation of the Al-Aqsa Mosque. Allah, make us among the first to enter, the conquerors, the worshipers, and those calling out âAllahu Akbarâ inside [the mosque] to You, Master of the Universe.â

âAllah, delight us with the extermination of the tyrannical Jews, O Master of the Universe, and [the destruction] of their hypocritical supporters who have evil in their hearts.â

The Temple Mount, known as Haram al-Sharif or the Al-Aqsa compound by Muslims, is Judaismâs holiest site and Islamâs third holiest. A perennial flashpoint for violence, it has been the nexus of clashes between Palestinian rioters and the Israel Police in recent weeks during Ramadan.

Israel has faced sharp criticism for its handling of the current violence and its decision to send police into the Temple Mount complex in order to quash riots. Israel has responded by providing evidence of Palestinian rioters armed with Molotov cocktails and rocks, some of the latter of which rained down upon Jewish worshipers at the Western Wall below.

The violence caused tensions with Israelâs Muslim allies, including diplomatic rebukes by the United Arab Emirates, Jordan, and Turkey.