U.N. Inaction on Indonesia
All Actions of the UN Human Rights System Critical of Specific States, 2016 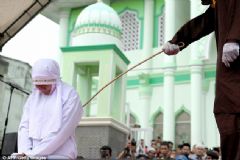 Kneeling on the ground, facing the floor as she prepares for her punishment, this woman is the latest victim of Indonesia's strict Islamic rules.

The 20-year-old was forced to undergo a public caning today after being caught standing too close to her boyfriend in Banda Aceh province.

Under Islamic Sharia law, unmarried couples are forbidden from becoming too intimate.

And after being accused of breaking the rules, she was brought to a stage outside a mosque after being escorted by two women and forced to kneel on the ground.

She was then given her punishment of being lashed across the back with a cane.