U.N. Inaction on Venezuela
All Actions of the UN Human Rights System Critical of Specific States, 2016 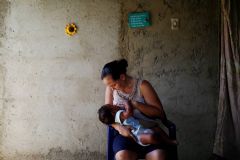 CUMANÃ, Venezuela-Medical staff at the University Hospital in this eastern Venezuelan city delivered two premature infants that needed incubation earlier this year. But because of the shortages plaguing the country, the hospital had only one functioning incubator, forcing staff to make an agonizing choice. They put the stronger of the two babies in the incubator. The other died days later.

Scenes like that continue to play out across this crisis-hit country on a daily basis. In the first five months of this year-the latest period for which government statistics are available-4,074 babies in Venezuela died before reaching a year, up 18.5% from the same period last year and more than 50% from that period of 2012.

Infant mortality is rising fast here, at a time when it is falling in almost every other part of the world, in one of the most alarming signals that Venezuela's social and state structures are unraveling.

"I think it represents a very serious social problem, where the basic functions of governance are breaking down," said Janet Currie, an economist and expert on infant mortality at Princeton University.

Venezuela's overall infant mortality rate-defined as deaths within the first year of life-is currently 18.6 per 1,000 live births, according to the most recent government statistics. That is well beyond the upper range of 15.4 UNICEF estimates for war-torn Syria.

Infant deaths in Venezuela remain significantly rarer than in the world's most impoverished countries like South Sudan and Congo, but they are rising fast, while rates in those poorer countries have been falling.

Venezuela was once held up as a model for health care in Latin America. But a shortage of hard currency, brought on by low oil prices and years of economic mismanagement, has caused shortages of everything.

Statistics on infant mortality in Venezuela are difficult to come by because the government no longer reports them regularly. Doctors at state hospitals, which most babies are born, are often sanctioned or threatened with job loss for making data public. The dire state of health care-once a pillar of the socialist government's so-called people's revolution-has become a state secret here, with armed security guarding health-care facilities and throwing out journalists who manage to enter.

In September, Venezuelans were outraged by leaked photos of newborns in cardboard boxes in the maternity ward of the state-run hospital Domingo GuzmÃ¡n Lander in the eastern state Anzoategui. The governor of the poor coastal state said the boxes were substitutes for incubators, adding volunteers could decorate them.

Rosa Angela Lara, 18, delivered a healthy, 6 1/2-pound baby boy in April. Days later, after purplish-blue blemishes began to spread on his body, he was dead from an aggressive infection that had swept through the Antonio Patrico AlcalÃ¡ Hospital in CumanÃ¡.

"How could they say he was O.K. and then, suddenly, he wasn't?" said a tearful Ms. Lara, a university student.

More than 100 other babies died here in the first four months of the year after nurses were unable to buy soaps and water was cut for hours at a time.

"It's a nightmare," said Ana Molina, a thin and drawn pediatrician who heads the neonatal unit. In September, 36 out of the 43 newborns that were put in critical care at the hospital died, according to Luis Vegas, the former head of the hospital's maternity ward who still has access to the epidemiological registry.

After the water was cut off for a few days earlier this year at the Luis Ortega Hospital in Porlamar, on the tourist resort of Margarita Island, seven infants died in less than a week of an outbreak of bacteria spread through fecal matter, doctors there told reporters.

In the country's far east, at the RaÃºl Leoni Hospital in Puerto Ordaz, babies sweltered in cribs while the August temperature hovered at 95 degrees. The refrigerator was broken, so milk couldn't be stored. Doctors said there was no rubbing alcohol, antibiotics or even cotton swabs. Deaths of babies have doubled from 15 a month in 2015 to 30 a month this year, doctors there said.

"If we had all the materials and equipment," said a doctor at RaÃºl Leoni, "it's very possible that those babies would have survived."

The situation poses danger for mothers as well. Childbirth-related maternal deaths in state hospitals are five times what they were in 2012, according to Venezuelan government statistics, bucking the global trend of a fall in maternal mortality by 44% percent since 1990, according to the United Nations.

Earlier this year, MarÃ­a de los Angeles CarreÃ±o, a vivacious, 19-year-old student from Porlamar who lived with her partner, Jelfred Gil,was excited to be having a baby girl and planned to name her Mia, her family said. Ultrasound and medical reports reviewed by The Wall Street Journal showed the pregnancy progressing normally.

But in April, she began to have breathing difficulties that her doctor worried could turn into a full-blown asthma attack. She was taken to the Luis Ortega Hospital. Her condition worsened and she was put into an induced coma, family members said. Three days later, doctors began to bring her out of the coma and induced labor.

Mia Milagros Gil CarreÃ±o was born prematurely on April 10, weighing 3.3 pounds, and her two tiny footprints stamped on her birth certificate. With good neonatal care, she would have likely survived, her mother's cousin said, but a nurse had bad news: There were no available incubators. Mia died three hours after birth.

Then the condition of the baby's mother began to worsen. She needed oxygen, family members said they were told, but the hospital's oxygen tanks were empty.

After burying the newborn, Ms. CarreÃ±o's cousin, Lorenis MartÃ­nez, prayed for Ms. CarreÃ±o before a faded statue of the Virgin of the Valley, the island's patron, in the hospital's dim waiting area. Ms. CarreÃ±o died, medical records noted, of multiple organ failure caused by septic shock.

"It was like I was punched the chest," said a choked-up Ms. MartÃ­nez a month later. "We lost them both."