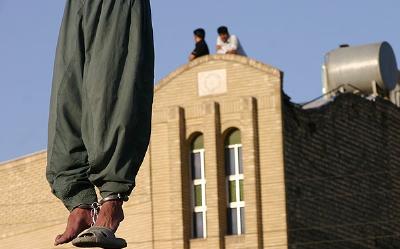 Executions in Iran rose by 25% in 2021, a report by two leading NGOs said on Thursday, expressing alarm over a surge in the numbers executed for drug offences and also the hanging of at least 17 women.

The rate of executions in Iran also accelerated after the June election of hard-line former judiciary chief Ebrahim Raisi to the presidency, said the report by Norway-based Iran Human Rights (IHR) and France's Together Against the Death Penalty (ECPM).

The report urged world powers negotiating with Iran on reviving the deal on its nuclear programme to put the use of capital punishment in the Islamic republic - which executes more people annually then any nation other than China - at the centre of the talks.

Meanwhile, at least 126 executions were for drug-related charges, five times higher than 2020's figure of 25.

This marked a major reversal of a trend of a decline in drug-related executions since Iran in 2017 adopted amendments to its anti-narcotics law in the face of international pressure.

Over 80% of executions were not officially announced, including all those for drug-related offences, it said.

The report "reveals an increase in the number of executions, an alarming rise in the implementation of death sentences for drug offences and an ongoing lack of transparency", the NGOs said.

IHR director Mahmood Amiry-Moghaddam expressed concern that there was "less scrutiny" on Iran's rights record as powers focused on bringing the nuclear negotiations to a positive conclusion.

There will be no sustainable (deal)... unless the situation of human rights in general and the death penalty in particular, are central parts of the negotiations.

The report said at least 17 women were executed in 2021, compared to nine in 2020. Twelve were sentenced for murder and five on drug-related charges.

There has been growing concern over the numbers of women executed on charges of murdering a husband or relative who activists believe may have been abusive.

It noted the case of one woman, Zahra Esmaili, who shot her husband dead in 2017.

It said she was executed in February 2021 and may have had a heart attack before being hanged after watching others suffer the same fate before her.

In another case, Maryam Karimi was convicted for the murder of her husband and was hanged in March 2021, with her daughter personally carrying out the execution by kicking away the stool as is allowed under Iranian law.

The report also expressed concern that the execution of ethnic minorities also continued to rise in 2021, accounting for a disproportionately large number of those hanged.

Prisoners from the Baluch minority accounted for 21% of all executions in 2021, although they only represent 2% to 6% of Iran's population, it said.

Most prisoners executed for security-related charges belonged to the ethnic Arab, Baluch and Kurdish minorities, it added.

We are alarmed at the disproportionate number of ethnic minority executions as evidenced in this report.

In one welcome development, the report said that there were no public executions in Iran in 2021 for the first time in a decade but expressed concern they could start again.

"A society routinely exposed to such organised violence has accepted the death penalty as a legal solution, and the death penalty has consequently become a tool of repression in the government's hands," the Iranian director Mohammad Rasoulof, whose films on the impact of the death penalty in Iran have won international prizes, wrote in a preface to the report.