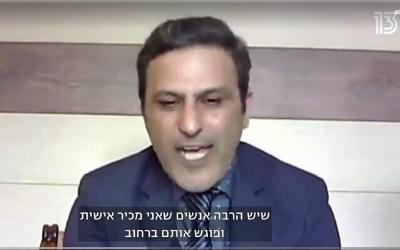 Iran has sentenced a dissident author to death on âespionageâ charges after he gave an interview earlier in the year to an Israeli television channel, opposition-affiliated media reported Thursday.

Iran International said that Mehdi Bahman was arrested in October after speaking with Channel 13.

The report said a Revolutionary Court had passed the sentence. In recent days at least 11 people have been sentenced to death for their role in protests and more than 100 face the death penalty, according to opposition groups.

While Bahman was arrested after the outbreak of protests, his interview with Channel 13 was given in April 2022 after he approached an Israeli woman to have one of his books translated into Hebrew.

In the interview, Bahman criticized the regime in Tehran and the imposition of Islamic law and called for normalization between Israel and Iran.

He told Channel 13 that he was not afraid of being arrested for talking to an Israeli channel.

Iran International said Bahman was an author and an illustrator who worked towards religious coexistence. In recent years he had worked with dissident Shia cleric Masoumi Tehrani to create artworks containing symbols from various religions and had given them as gifts to leaders of the minority Jewish, Christian, Zoroastrian, Sunni Islam, Mandaean Sabian, and Bahaâi faiths in Iran.

The report said Tehrani was also arrested shortly after Bahman. There was no word on his fate.

Several other opposition-affiliated media outlets also reported the arrest. But there was no official confirmation of the sentence from Iranian officials or state media.

Iran accuses Iran International, a Persian-language satellite news channel once majority-owned by a Saudi national, of stoking recent nationwide protests that have escalated into deadly violence.

Iran International, for its part, describes itself as an âindependent news organization providing uncensored, accurate and unbiased news to a Farsi-speaking viewership within and outside Iran.â It says it has âno affiliation or associationâ with any political group or any organization.

Protests have gripped Iran since the September 16 death in custody of Iranian-Kurdish Mahsa Amini, 22, after her arrest in Tehran for an alleged breach of the countryâs strict dress code for women.

Iran has sought to crack down on the demonstrations and deter protests by imposing harsh punishments, including the death penalty, with some public executions taking place.

In a report Tuesday, IHR identified 100 detainees who face potential capital punishment, including at least 11 already sentenced to death.

The report said many of them have limited access to legal representation.

âBy issuing death sentences and executing some of them, they (the authorities) want to make people go home,â said IHR director Mahmood Amiry-Moghaddam.

âIt has some effect,â he told AFP, but âwhat weâve observed in general is more anger against the authorities.â

In an updated death toll issued Tuesday, IHR said 476 protesters have been killed so far.

At least 14,000 people have been arrested since the nationwide unrest began, the United Nations said last month.

Majidreza Rahnavard, 23, was hanged in public from a crane on December 12 after being sentenced by a court in Mashhad for killing two members of the security forces with a knife.

Four days earlier, Mohsen Shekari, also 23, had been executed for wounding a member of the security forces.

The judiciary has said that nine others have been handed death sentences over the protests, of whom two have been allowed retrials.