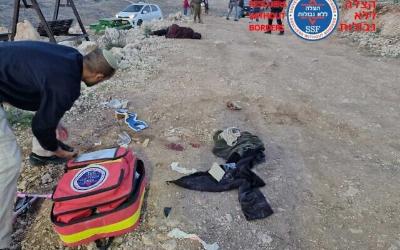 The scene of a stabbing attack in the southern West Bank on January 11, 2022. (Courtesy)

An Israeli man was stabbed and moderately wounded in a suspected terror attack in the South Hebron Hills area of the West Bank on Wednesday, the military and medics said.

According to the Israel Defense Forces, the victim was stabbed in the head at the Havat Yehuda (Yehuda Farm) illegal outpost, and the alleged attacker was âneutralized.â The Rescuers Without Borders emergency service later said that the suspect succumbed to his wounds.

The Magen David Adom ambulance service said its medics took the victim, in his 30s, to the Soroka Medical Center in Beersheba where he was being treated in the trauma ward. He was identified as Elyashiv Nahum, the owner of the wildcat farm adjacent to the Eshtamoa outpost.

The stabber was named by the Palestinian Authority health ministry as Sanad Muhammad Othman Samamreh, from the nearby city of ad-Dhahiriya.

According to Nahumâs wife, Roni, the attacker had approached their home and asked for water, before pulling out a knife and stabbing him. She told reporters that another Israeli man who had come to repair an electrical problem at the farm shot the stabber.

The attack came amid heightened tensions in the West Bank.

Earlier Wednesday, Palestinian gunmen fired dozens of bullets at a military base and nearby checkpoint on the security barrier in the northern West Bank, the Border Police said.

According to a police spokesman, no injuries were caused by the gunfire at Salem base, close to a crossing between Israel and the West Bank and an Arab Israeli town of the same name.

No officers or soldiers were hurt in the incident, and Border Police officers fired back at the gunmen, who fled toward the Jenin area.

Police said officers and IDF troops launched a manhunt for the suspects.

Also on Wednesday, a Palestinian gunman was shot dead during clashes with Israeli troops in Nablusâs Balata refugee camp in the northern West Bank, the military and Palestinian health officials said.

The IDF said 16 Palestinians were arrested elsewhere across the West Bank, with some violent incidents.

The IDFâs operation has netted more than 2,500 arrests in near-nightly raids. It also left over 170 Palestinians dead in 2022, and another six since the beginning of the year, many of them while carrying out attacks or during clashes with security forces, though some were uninvolved civilians.