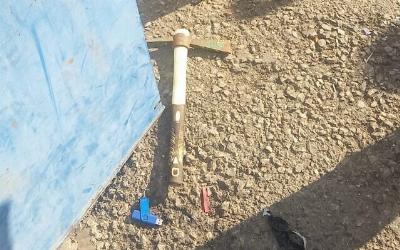 A pickaxe used by a Palestinian assailant at the scene of a car-ramming attack, November 2, 2022 (Courtesy)

An officer in the Israel Defense Forces was seriously wounded Wednesday morning in a car-ramming attack at a West Bank checkpoint east of the Israeli city of Modiin and near the West Bank settlement of Beit Horon, the military said.

Footage of the incident at the âBellâ checkpoint, where Routes 4436 and 4437 from Beit Ur and Ramallah hit the major Jerusalem-Tel Aviv highway Route 443, showed a van hitting the officer before the driver gets out of the car and appears to try to attack the victim with a pickaxe.

The injured officer then shot the Palestinian assailant, killing him.

He was named by Palestinian media as Khabas Riyan, 54, from the West Bank village of Bayt Duqu.

Israeli media said two of his sons have served time in prison for terror offenses, and one of them is still behind bars.

The military asked for the footage of the incident not to be published.

The officer, in his 20s, was taken to the Shaare Zedek hospital in Jerusalem, where he was listed in serious but stable condition, according to medical officials.

The incident came a day after Israelâs national election, during which a closure was imposed on border crossings for Palestinians between the West Bank and Israel. The closure of the crossings had ended at midnight between Tuesday and Wednesday.

The attack also came amid heightened tensions in the West Bank.

On Sunday, a Palestinian driver plowed his vehicle into Israeli soldiers at two locations south of the West Bank city of Jericho, injuring five of them before being shot.

In a shooting terror attack on Saturday, Israeli Ronen Hanania was shot dead Saturday night while visiting a convenience store located between the West Bank settlement of Kiryat Arba and the adjacent city of Hebron, after a Palestinian gunman opened fire. The terrorist was rammed by a security guard and shot dead by an off-duty soldier.

Another Israeli was killed in a suspected attack in September, and four soldiers have been killed in the West Bank in attacks and during the arrest operations.