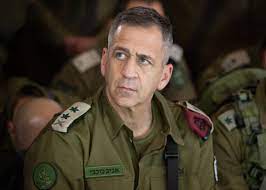 Israeli official: At least 10 attacks thwarted in past two weeks

Chief of Staff Aviv Kochavi announced on Monday that at least 10 attacks were thwarted by Israel in the past two weeks.

The official, who was speaking at a military ceremony, explained that these attacks were foiled due to Israelâs intelligence measures and operations.

While delivering his remarks, Kochavi lauded Israelâs army for the âprofessionalism, courage, and determination that the unitsâ¦ act with in order to overcome terror,â according to Ynet.

The news arrives as Israel bolsters its security efforts over concerns of increased violence during this yearâs holiday season following a series of deadly terror attacks around the country last week.

A cumulative total of 11 people were killed in a one-week period across three fatal attacks - one shooting in Bnei Brak, another in Hadera, and a stabbing attack in Beersheba.

Both the Beersheba and Hadera attacks were committed by Israeli citizens with suspected links to the Islamic State, according to The Times of Israel.

An unsourced media report from Channel 13 on Friday said Israelâs security service, the Shin Bet, is working to crack down on suspected supporters of the Islamic State.