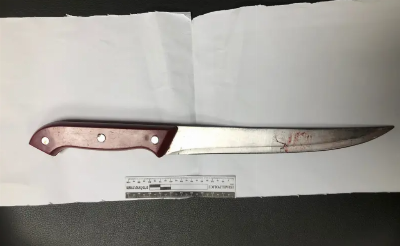 A knife used in a terror attack (Illustrative)

A stabbing was reported in the West Bank city Hebron on Sunday, and an officer with Israelâs border police was lightly wounded in the attack.

The assailant, reportedly a Palestinian woman, was shot dead.

âA terrorist recently arrived at one of the checkpoints of the Border Police officers in the area of the Cave of the Patriarchs and stabbed an officer who was there,â Israel Police announced.

Earlier in the day, Israeli troops shot and killed an unarmed Palestinian woman in the West Bank after she moved toward the soldiers âin a suspicious mannerâ and refused to halt after warning shots were fired, police said.

In recent weeks, Israel bolstered its security efforts in the West Bank and other flashpoint areas in an attempt to counter a growing number of attacks on its citizens.

After visiting the victims of the shooting at Ichilov Hospital on Saturday night, Israelâs Prime Minister Naftali Bennett pledged to take a more assertive approach to violence in the country.

He said that Israel is âmoving from defense to attack and we will track down the sources of terrorism whenever and wherever they are.â