U.N. Inaction on Israel
All Actions of the UN Human Rights System Critical of Specific States, 2022 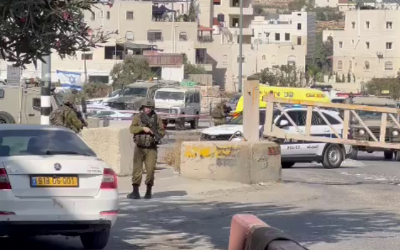 IDF troops are seen at the scene of a stabbing attack near the West Bank city of Hebron, September 2, 2022. (Screenshot: Twitter)

Israeli stabbed by Palestinian near Hebron

A man was moderately hurt in an apparent stabbing attack near the West Bank city of Hebron Friday afternoon, near the settlement of Kiryat Arba, the military and medics said.

According to the Israel Defense Forces, the alleged Palestinian stabber was shot by troops. The Rescuers Without Borders emergency services said the assailant had died.

The stabbing victim, in his 20s, was taken to the Hadassah Ein Kerem Medical Center in Jerusalem after sustaining a moderate injury, according to the Magen David Adom ambulance service.

According to Palestinian media reports, clashes erupted at the scene following the suspected attack.

Early Friday, Israeli troops arrested three wanted Palestinians in raids across the Wet Bank, with violent incidents in some areas, the IDF said.