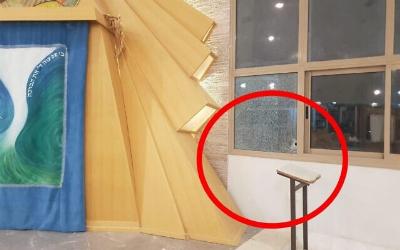 A shattered window at a yeshiva in the southern West Bank town of Carmel following a shooting attack, September 15, 2022. (Courtesy)

The head of a yeshiva in the southern West Bank settlement of Carmel said Friday that he was leading a study session when one of his students was struck in a suspected terror shooting.

The 18-year-old was moderately wounded in the attack Thursday night and taken to the hospital for treatment. Israeli security forces launched a manhunt in the area after the assailant fled.

Speaking with Kan public radio, Rabbi Natan Ofner of Yeshiva Reuta said his pupil was now listed as lightly hurt and was due to undergo surgery to remove shrapnel.

âWe were sitting and studying when we began to hear a loud noise behind the study hall. One [of the students] went out to check what was going on and we heard another noise. In retrospect, we understood it was gunshots, but we didnât realize, we thought something had fallen,â Ofner said.

âThe same student and I walked over there, everything appeared normal and then we heard three very loud blasts, followed by a volley of gunfire that penetrated the door,â the rabbi continued. âWe still didnât understand we were in a shooting attack and then [the student] noticed he was soaked in blood.â

âAll the guys realized what was going on. We went into a more protected area. We alerted the army and they arrived quickly.â

Ofnerâs comments came as security forces continued to search for the suspect.

Separately, the Israel Defense Forces said 17 Palestinians were arrested across the West Bank overnight as part of a months-long counterterror operation.

An IDF statement says troops seized an illegal weapon â which appeared to be a âCarloâ style homemade submachine-gun â during a raid in the northern West Bank, while shots were fired at soldiers carrying out a separate arrest in the area.

No Israeli forces were injured.

The shooting and arrests came amid rising violence in the West Bank.

Israeli troops have repeatedly come under gunfire during nightly raids in the West Bank, during the prolonged effort against Palestinian terrorists. The military launched the operation after a series of deadly attacks that killed 19 people between mid-March and the beginning of May.

More than 2,000 suspects have been detained since the beginning of the year, according to the Shin Bet security agency.