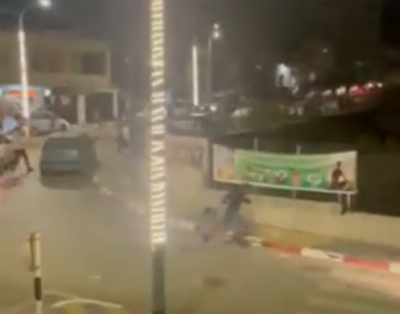 Clash in the West Bank village of Silwad (Screenshot)

Israel's military reportedly thwarted a major attack planned for the eve of Passover that was set to take place in Jerusalem, Hebrew media reported Wednesday night.

Multiple people were arrested in the West Bank village of Silwad, near Ramallah, who were planning on carrying out the attack, Israel's military said.

According to reports, Israeli forces used a loudspeaker to demand that suspects located in a house surrender. Crowds threw stones at Israeli security vehicles and clashes broke out in neighborhoods in the surrounding area.

One of the arrested was 33-year-old Maad Hamed, a member of the Hamas terror organization, Israel's internal security service (Shin Bet) announced. According to the Shin Bet, Hamed was a member of a terror cell that carried out a shooting attack near Kida in 2015, killing one and wounding three others.

Hamed was being held by Palestinian Authority security forces since the attack, but escaped on Wednesday and had intent to carry out attacks against Israelis, according to a statement from the Shin Bet.

All those arrested were transferred to the Shin Bet for interrogation.