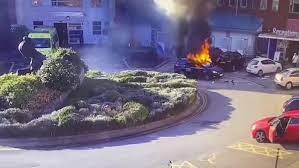 Security camera footage of the explosion

Suicide bomber blows himself up in a taxi outside a maternity hospital in Liverpool; UK raises terror threat level

A suspected suicide bomber blew himself up with a homemade device outside a maternity hospital in Liverpool, forcing the national terror threat level to be raised for the first time in months amid fears of another potential attack.

Counter-terrorism police last night said they âstrongly believedâ the dead man to be Emad al-Swealmeen, 32, who had travelled in a taxi to Liverpool Womenâs hospital from an address he had recently rented a few miles away.

While police said they could not be sure if the hospital was the intended target, or if the device he had constructed had ignited prematurely, NHS officials last night advised all hospitals to review their security arrangements.

In a statement issued on Monday night, DCI Andrew Meeks urged anyone with information about the dead man to come forward immediately.

âOur inquiries are very much ongoing â¦ and now that we have released his name any information that the public may have about al-Swealmeen, no matter how small, may be of great assistance to us.â

The Guardian understands al-Swealmeen had previously changed his name to Enzo Almeni. He was reported by the Daily Mail to have converted to Christianity from Islam in the last few years.

Earlier, police declared the incident a terror attack and the home secretary, Priti Patel, announced the UKâs terror threat level would be raised from substantial to severe, meaning another attack was âhighly likelyâ.

After a national emergency meeting, the prime minister, Boris Johnson, urged the public to remain vigilant. Four men who had been arrested in the Kensington area of Liverpool were released without charge by counter-terror police on Monday night.

âWhat yesterday showed above all is that the British people will never be cowed by terrorism, we will never give in to those who seek to divide us with senseless acts of violence,â Johnson said. âAnd our freedoms and our way of life will always prevail.â

The suspect is not previously known to MI5, which keeps a list of 3,000 current suspects and just over 20,000 previous ones, or to specialist counter-terrorism police officers.

Assistant chief constable Russ Jackson, from Counter Terrorism Policing North West, said the improvised explosive device was built by a man who had hired a taxi to take him to Liverpool Womenâs hospital on Remembrance Sunday.

The hospital is close to Liverpool Cathedral.

âThe reason why he then took [the device] to the Womenâs hospital is unknown, as is the reason for its sudden explosion,â he said.

âWe are, of course, aware that there were remembrance events just a short distance away from the hospital and that the ignition occurred shortly before 11am.

âWe cannot at this time draw any connection with this but it is a line of inquiry we are pursuing.â

Jackson said the taxi driver, David Perry, picked up a fare in Rutland Avenue, Liverpool, shortly before 11am on Sunday. The man asked to be taken to the hospital, about 10 minutes away.

He said inquiries indicated that the device was brought into the cab by the passenger.

Dramatic footage that emerged on Monday showed the taxi pulling up to the hospital and then the explosion within the vehicle. Perry could be seen stumbling from his black vehicle and fleeing to safety before it went up in a ball of flames. He was treated for serious injuries and released on Monday.

Perryâs wife, Rachel, said he was âlucky to be aliveâ, adding âhow he managed to escape is an utter miracleâ, while intelligence experts told the Guardian the hospital had a âlucky escapeâ because the explosive device âclearly didnât go off as the terrorist intendedâ.

The dead man is believed not to be British-born and to have had Syrian and Iraqi heritage. His status in the United Kingdom is under investigation, as is his time at a privately run asylum seeker hostel in Liverpool.

The company that runs it declined to comment and referred all inquiries to the police.

From Sunday afternoon onwards, an address was searched in Rutland Avenue in Sefton Park, where police found âsignificant itemsâ.

In his statement, DCI Meeks said al-Swealmeen was connected to addresses in Rutland Avenue and to another on Sutcliffe Street.

âWe believe he lived at the Sutcliffe Street address for some time and had recently rented the Rutland Avenue address,â said Meeks.

âOur focus is the Rutland Avenue address where we have continued to recover significant items.â

Three men aged 21, 26 and 29 were arrested on Sunday under the Terrorism Act, while a fourth man aged 20 was arrested on Monday.

The first three arrests took place in Sutcliffe Street, where witnesses reported seeing armed officers swoop on a terrace house on Sunday afternoon. The fourth arrest took place in the Kensington area of the city on Monday, police said.

Keith Ford, 47, a production operative who lives in Sutcliffe Street with his partner and 13-year-old daughter, witnessed the dramatic arrests. âIâd say about an hour and a half later, a man came out of the property that they were pointing the guns at,â he said.

âHe came to the front door, police shouted at him, saying âhands up in the airâ, then he walked to the pub on the end of the corner.â

Ford described the man as having dark hair, dark trousers and a blue T-shirt. He continued: âA couple of hours later, another man came to the door, the police were shouting at him, saying: âHands up in the air, hands up in the air.ââ

He understood that the occupants of the property changed around two months ago and he had not seen anyone since they moved in.

Johnson chaired a Cobra meeting on the attack on Monday afternoon; Cobra is shorthand for the Civil Contingencies Committee, which is convened to handle matters of national emergency or major disruption.

The decision taken on Monday by the Joint Terrorism Analysis Centre represents an upgrade of one notch from the previous threat level of substantial.

The threat level had been at the lower level since 8 February after a âsignificant reductionâ in the momentum of attacks in Europe, including those seen in Austria and France between September and November 2020.

Announcing the change, Patel said the terror threat level had been raised because there had been two attacks in the space of a month.

âAnd thereâs a reason for that, and that reason is because what we saw yesterday is the second incident in a month.â