U.N. Inaction on Burundi
All Actions of the UN Human Rights System Critical of Specific States, 2015 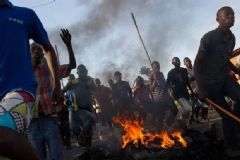 Protesters run across a fire towards police lines in the Musaga neighbourhood of Bujumbura, Burundi.(Phil Moore/AFP/Getty Images)

Protesters burned a man alive on the streets of Burundi's capital on Thursday, saying he was a member of the ruling party's youth wing that had attacked them during demonstrations against the president's third-term bid, a witness said.

Protesters have been on Bujumbura's streets for almost two weeks, often hurling stones at police who they say have fired live rounds, which police deny.

The confrontations have plunged the African nation into its worst crisis since an ethnically fuelled civil war ended in 2005.

"They put tyres around his neck and then burned him," a witness told Reuters after seeing the man killed in the Nyakabiga district of Bujumbura, one of protest flashpoints.

Local media also reported the incident, while the Red Cross said a man was killed in Nyakabiga but, in line with its usual practice, did say how he died. It said a woman was killed in another area, taking Thursday's death toll to two.

Protesters said the victim of the burning was a member of the Imbonerakure youth wing of the ruling CNDD-FDD party, which they say has a attacked them. The government has regularly dismissed charges that Imbonerakure is fomenting violence.

Presidential spokesman Gervais Abayeho condemned the Nyakabiga killing "in the strongest terms possible". "We don't want the situation to degenerate and take us back to those years when people were killed on the streets in broad daylight," he said.

Opponents of President Pierre Nkurunziza say his bid for a third term violates the constitution and a peace deal that ended a war pitting the ethnic Hutu majority against the Tutsi minority.

Rallies, which have so far been confined to the capital, have included protesters by members of both ethnic groups. But diplomats say an escalation in violence could reopen old wounds. A constitutional court ruled on Tuesday that Nkurunziza, who once led the main Hutu rebel group, was allowed to run because his first term, when he was picked by lawmakers and not elected, did not count. The opposition say the court is biased.

"I will respect the decision of the constitutional court," Nkurunziza said in a televised address on Wednesday night. "I would like to assure the national and international community that in case I am elected now, this will be my last term."

The president has called the protests illegal and an "insurrectional movement". He has offered amnesty to the scores who have been detained if the protests stop.

Civil society groups and opposition parties say protests will go on until he drops his plan to stand, but urge peaceful rallies.

"We ask all those protesting against the third term to continue to demonstrate peacefully and show restraint," Gabriel Rufyiri, a member of the civil society groups which has been calling for the demonstrations, told Reuters.

Worried about a relapse into bloodshed, foreign ministers from the East African Community nations were in Bujumbura this week to discuss the crisis.

Alongside Burundi, the other members are Kenya, Uganda, Tanzania and Rwanda, a nation with the same ethnic mix as Burundi. Rwanda suffered a genocide in 1994 in which 800,000 mostly Tutsis and moderate Hutus were slaughtered.

Almost 40,000 people, many of them Tutsis, have already fled Burundi to neighbouring states Rwanda, Tanzania and Democratic Republic of Congo for fear that violence will spread across the country.