U.N. Inaction on Lebanon
All Actions of the UN Human Rights System Critical of Specific States, 2014 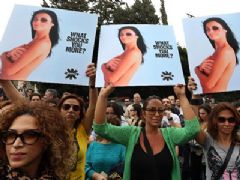 The Lebanese have long pointed to their democratic system and liberal state as a beacon for the turbulent Middle East region.

But this week Lebanon's parliament showed how backward the country can still be â by passing an archaic and sectarian domestic violence law, activists charge.

The parliament on Tuesday passed Lebanon's first domestic violence law that had been pending since 2010. The law amended a draft written by the local rights group Kafa, Arabic for enough, stripping away protections against marital rape and allowing religious laws to prevail over civil, among other issues. The current law also favors fathers in child custody battles, even if they're proven to be abusive.

Activists protested the law's passage, holding signs that said "You are not fooling anyone on April fools' day!" in reference to the legislation's inadequacies and its ratification on April 1.

One protestor pranced around a pressure cooker with a sign that screamed "I refuse to be another candidate for murder!"

The pressure cooker was in reference to the case of Manal Assi, who was allegedly bludgeoned to death by her husband earlier this year with the kitchen tool. A lawyer for the husband has maintained that his client was provoked by his wife.

"I am here with my daughter because I am concerned about her future as well as my granddaughter's future and I want to protect them," said Batol, who protested the law at parliament with her daughter.

Kafa has a hotline for victims of domestic abuse and receives over 2,600 complains yearly.

In the new law "marital rape has been renamed and legalized," said Maya Ammar, a Kafa member.

Diana Mokalled, an activist, charged that the "law assures that a woman's body is owned by her husband [by deferring civil legislation to] religious personal status laws."

But on the other side of the coin are Lebanon's conservative parties, who had lobbied parliament to respect religious law regarding marital and family disputes and continue to uphold sectarian legislation over civil.

Conservative activists emitted a sigh of relief over parliament's amendment to Kafa's draft law, which upholds religious rulings against civil.

"The amendments suggested by Kafa aim to the dismantlement the family," said Maha Fatha, a prominent female lawyer and president of the Lebanese Association for Preserving the Family.

Ms. Fatha is close to the conservative political group al-Jamaa Islamiya in Lebanon.

But even Ms. Fatha thought the law wasn't enough when it came to domestic abuse, although her suggestions are archaic, according to Kafa members.

"We don't consider the law ordered today will protect women from violence," a Kafa member said this week. We need "a process that starts with educating people since childhood to know more about marriage and its responsibilities and how to choose a husband."