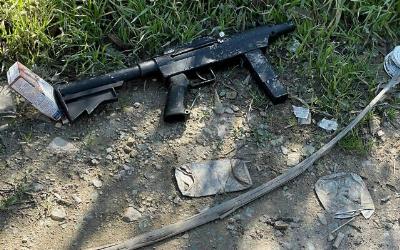 The gun used by a Palestinian gunman in an attempted attack against Israeli troops near Halhul in the southern West Bank, January 17, 2023. (Courtesy)

A Palestinian gunman who opened fire at troops in the southern West Bank on Tuesday was shot dead by troops, the Israel Defense Forces said, adding that he was also suspected of being responsible for another attack two days earlier.

According to the IDF, troops stationed near the Palestinian town of Halul, not far from Hebron, came under fire by the gunman. He âfired at the forces, who returned fire and neutralized him,â the military said.

His death was declared at the scene. No Israeli soldiers were hurt in the attack, the IDF said.

Images from the scene showed the gunman had used a makeshift âCarloâ submachine gun in the attack.

He was named by the Palestinian Authority Health Ministry as 40-year-old Hamdi Shaker Abdullah Abu Dayyah.

A supposed will written by Abu Dayyah before the attack was circulated online, in which he wrote he that he was sacrificing his life to protect holy sites and the honor of Islam.

The IDF said it suspected the gunman was responsible for another attack in the area on Sunday afternoon.

In the incident Sunday, a bus carrying Israelis on the Route 60 highway near Halhul came under fire. No injuries were caused after one bullet struck a window near the driverâs seat.

The shootings came during an Israeli anti-terror offensive, mostly focused on the northern West Bank, to deal with a series of Palestinian attacks that killed 31 people in 2022.

The IDFâs operation has netted more than 2,500 arrests in near-nightly raids. It also left more than 170 Palestinians dead in 2022, and another 15 since the beginning of the year, many of them while carrying out attacks or during clashes with security forces, though some were uninvolved civilians.

In arrests raids early Tuesday, the IDF said troops arrested 10 wanted Palestinians across the West Bank, with violent incidents in some areas.

In the city of Qabatiya, near Jenin, the IDF said troops opened fire at Palestinian gunmen who shot at them, adding that at least one suspect was hit.

The IDF said the 10 Palestinians who were arrested in the West Bank over suspected terror activities were taken to be questioned by the Shin Bet security agency.

No Israeli soldiers were hurt in the overnight raids, the IDF said.