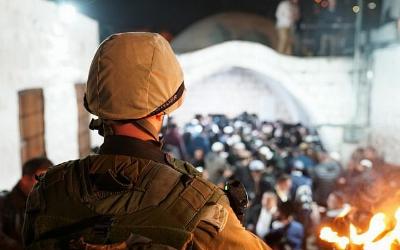 During a coordinated visit to Josephâs Tomb in Nablus on Wednesday night, Palestinians opened fire at Israeli security forces and violent clashes broke out. Wasim Khalifa, 18, from the Balata refugee camp, near Nablus, was killed, and at least 30 other Palestinians were injured, according to the Red Crescent.

Some 600 worshipers were brought to the tomb complex as part of a planned visit in coordination with the IDF.

During the clashes, an Israeli bus was hit near the tomb. It remained unclear whether the damage was from stone-throwing or shooting. No Israeli civilians were hurt.

A soldier from the Givati Brigadeâs Reconnaissance Battalion soldier was hit by friendly fire after an accidental weapon discharge. The bullet was stopped by the protective armor he was wearing, leaving him only lightly injured with no need for further medical care, KAN News reported.

Jewish worshipers entered the tomb accompanied by security forces employing revised security arrangements in light of recent incidents at the site. IDF snipers and soldiers were deployed along the route to the tomb, and security routes were altered to better secure the complex, the IDF said.

The troops were accompanied by OC Judea and Samaria Division Brig.-Gen. Avi Blut.

As a result, an almost completely isolated corridor was created to minimize the potential risk to civilians visiting the tomb. After Palestinians began shooting at worshipers, the IDF returned fire.

Among the hundreds of worshipers who came to pray at Josephâs Tomb last night were Samaria Regional Council head Yossi Dagan and several Likud candidates for the Knesset: Eliyahu Ravivo, No. 19 on the Likud list; Nissim Vaturi, No. 21; and Dan Ilouz, No. 33.

âEntering Josephâs Tomb tonight is a sharp and clear statement that we will continue to enter it and not give in to attempts to stop the Jewish presence in Josephâs Tomb,â Dagan said. âNow is the time to increase visits to send a clear message to our enemies.â

Ravivo said: âThe right granted to us in the Land of Israel is deeply rooted in the graves of our ancestors and is a fundamental right for every Jew. There is no doubt that a nation that remembers its past, sanctifies its saints and cherishes its ancestors deserves to dwell in this land.â

âThe more we connect to our roots, we will surely receive the blessing of our ancestors that will apply to us,â he said. âThere is no doubt that our role from now on in the Israeli Knesset is to make sure that Jewish identity is deepened clearly and proudly without any fear.â

âWe will make sure that institutions in the education system reinforce the basic understanding that it is our right to exist here in the Land of Israel, to reach the holy places and to learn everything that our ancestors did, whose actions sanctified life,â Revivo said. âI would like to thank our dear host, Yossi Dagan, and all the soldiers who give their lives here to allow us to enter naturally and regularly.â

A series of security incidents in Israel's West Bank

Last week, IDF and Yamam forces, in a joint operation with the Shin Bet (Israel Security Agency), killed Ebrahim Al Nabulsi, a member of Fatahâs Al-Aqsa Martyrs Brigades wanted by Israel, whose name was chanted by local Palestinians during the unrest, Maariv reported.

After security forces surrounded his house to arrest him, an exchange of gunfire ensued, during which he and his aide were killed. According to the Palestinian Authority Ministry of Health, Islam Sabuh and Hussein Jamal Taha were also killed.