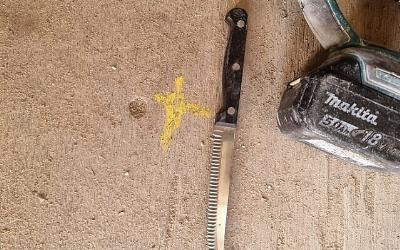 The knife used in a stabbing attack in Ashkelon (Israel police)

A policeman was lightly wounded after being stabbed by a Palestinian man early Tuesday in the southern city of Ashkelon, police said. The assailant was shot and killed.

The incident occurred when the officer approached to investigate the man, who was acting suspiciously. During the check, the man drew a knife and stabbed the officer.

Police said the officer managed to draw his gun and shot and killed the attacker.

The Magen David Adom rescue service took the police officer to the nearby Barzilai hospital.

The officer said later that he encountered the man during a check for Palestinians in Israel illegally.

âWhen I crouched to check the lower part of his body and felt a blow. He stabbed me in the head and I fell to the ground.â He said the man continued trying to stab him before he was able to draw his gun and shoot him.

The incident occurred at a building site in the city. Police said the attacker was a resident of Hebron in the West Bank, in his forties, who was in Israel illegally.

The incident comes with security forces on high alert as Israel is facing its deadliest wave of terror attacks in recent years, with 14 people killed in the last two weeks.

On Sunday, a Jewish Israeli man snatched a weapon from a soldier at a junction near Ashkelon before being shot dead by a top military officer, police said, in an incident that underscored tensions in the country.

The man â who was not immediately named â died of his wounds at the scene. The incident was initially thought by many to be a terror attack committed by a Palestinian.