U.N. Inaction on Qatar
All Actions of the UN Human Rights System Critical of Specific States, 2020 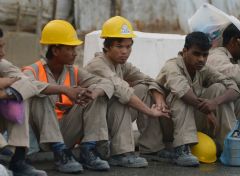 Nine migrant labourers working on the stadiums for the 2022 World Cup in Qatar died in 2019, the "supreme committee" organising the event has announced, bringing the number of deaths on World Cup projects to 34, since construction began six years ago.

31 of the deaths, including the nine who died last year, are classified as "non-work related", a term the supreme committee uses to describe deaths that largely occur off the worksite, most of which are attributed to sudden and unexplained cardiac or respiratory failure.

The latest figures, released in its annual report on workers' welfare, include four workers who died of so-called natural causes and three who were killed in a company bus accident. There were no deaths caused by workplace accidents in 2019.

The supreme committee said it investigates each death to identify contributory factors and preventative measures. "Any loss of life on our programme is deeply saddening," said Hassan Al Thawadi, the head of the supreme committee, in the report.

Qatari law and the supreme committee's worker welfare standards do not require companies to pay compensation for non-work related deaths. However, in October the Guardian revealed that Qatar rarely carries out post-mortems when a migrant worker dies, making it difficult to accurately determine the cause of death and establish if it was non-work related. The Guardian further found that Qatar's extreme summer heat is likely to be a significant factor in many worker deaths.

The widow of one of the stadium workers who died last year is still waiting for a response to a letter she wrote to Al Thawadi, asking for compensation. Her husband, Rupchandra Rumba, a 24-year-old labourer from Nepal, died suddenly in his sleep in June.

In the letter, which was sent over a month ago, Nirmala Pakrin explained that the company which directly employed Rumba offered her just 7,000 Qatari rials (Â£1,500).

'In the absence of my husband who used to take care of our needs, our family is going through a serious crisis ... I believe my husband's life is worth more than 7,000 rials,' she wrote.

A spokesperson for the committee said, "[Al Thawadi] will be responding personally, in due course, after giving Ms Nirmala's letter the care and attention required, to ensure all avenues for compensation and assistance ... have been reviewed and considered."

The supreme committee says it is encouraging contractors to take out additional insurance that covers "non-work related" deaths, so that families will receive compensation in the event of a worker's accidental or natural death.

The report also describes a number of measures to address some of the most common labour abuses in Qatar, including a scheme to repay illegal recruitment fees and a crackdown on low wages, which has seen some stadium workers earning as little as Â£35 a week.

Less than 2% of Qatar's 2 million migrant workers are employed on World Cup stadium projects, but efforts to improve the conditions of the whole workforce appear to have stalled, as a raft of major reforms announced in October have yet to be implemented.

The reforms, which were unveiled by the Qatari authorities and the UN's International Labour Organisation (ILO), were expected to bring an end to the "kafala" system, under which workers are unable to change jobs without their employer's permission, a practice some campaigners have described as a modern form of slavery.

The ILO had said that the new laws, which it described as "a momentous step forward in upholding the rights of migrant workers", would come into force in January, but the only measure to be implemented so far is the extension of an existing provision â that allows workers to leave the country without requiring their employer's permission â to include groups such as domestic workers.

Rights groups have called on Qatar to immediately implement the reforms. "For migrant workers who are being overworked, housed in dismal conditions, unpaid or underpaid for months on end ... every day they spend trapped is a day spent in fear, anxiety, and instability," said Hiba Zayadin, Gulf researcher at Human Rights Watch.

Qatar has come under intense international pressure to reform its labour system since the Guardian first revealed the widespread abuse of its vast migrant workforce, who come from some of the poorest countries in the region. But workers' rights activists have criticised the lack of progress with less than three years to go before the World Cup kicks off.

"Qatar has been promising to abolish kafala since at least 2014 and actually claimed to have done it in 2016," said James Lynch, a director at Fair / Square Projects and an expert on migrant workers in the Gulf. "Qatar should have gripped this issue years ago, before most of the World Cup stadiums and infrastructure were built by workers bound by this exploitative system."

The head of the ILO office in Qatar, Houtan Homayounpour, said the reforms were taking longer than expected due to their complexity, but that their adoption "is just a matter of time."

The Qatar government's communications office defended its record on reforms, saying the new laws will be adopted following a rigorous review process. "Qatar has done more than any other country in the developing world to raise labour standards and confront worker exploitation," it added.

FIFA, football's world governing body said the World Cup had already played a significant role in improving labour rights in Qatar, although, "additional progress is needed for the full implementation of the commitments for comprehensive labour reform."