U.N. Inaction on Canada
All Actions of the UN Human Rights System Critical of Specific States, 2014 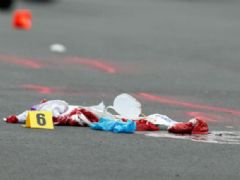 Bloodstained medical materials mark the scene of a hit and run in Saint-Jean-sur-Richelieu near Montreal on Monday October 20, 2014.

The man police say deliberately drove a car into two soldiers in a "despicable act" the government linked to terrorist ideology had been arrested by RCMP this summer, a spokeswoman for the federal police force said Tuesday.

Martine Fontaine said authorities met with Martin Rouleau-Couture as recently as Oct. 9 and that there was nothing to indicate any such violent behaviour was in the offing. One of the soldiers struck by the car died.

The RCMP investigation into Rouleau began last June when they saw on his Facebook account he was "radicalizing" himself.

The RCMP were tracking Rouleau, along with 89 others who had intensions to join militant groups. Officials seized Rouleau's passport as he was about to leave the country but didn't have grounds to charge him with anything.

"We couldn't arrest someone for having radical thoughts," Fontaine said. "It's not a crime in Canada.

"And unless we have clear indications of what he was doing, it was very difficult to prevent and stop him."

"It is an unacceptable act of violence against our country, our Quebec values, our Canadian values," he said in Saint-Jean-sur-Richelieu, the town southeast of Montreal where 25-year-old Rouleau allegedly mowed the soldiers down with a car.

Police said Tuesday that the driver was spotted sitting in his car at the scene more than two hours before the collision.

Lt. Guy Lapointe of the SÃ»retÃ© du QuÃ©bec said investigators' working theory is that the military member and a colleague, who suffered minor injuries, were targeted.

"The working thesis is that it's a deliberate act," Lt. Lapointe told reporters. "With regards to how far was it planned, it's really hard to say. The investigation is starting."

He said the driver was seen in his car in a parking lot at 9:15 a.m. Monday. The victims were hit as they walked through the parking lot at 11:33, he said, and a municipal police officer on patrol gave chase.

Police are asking members of the public to contact them if they spotted the vehicle, a beige Nissan Altima, from 2000.

Minister Blaney said he was "horrified and saddened," calling the attack an affront to Canadian values. Prime Minister Stephen Harper echoed the minister in a statement Tuesday, offering his condolences to the slain soldier's family and friends after what he called a "vicious event."

"I want to express that the authorities can count on our full support in order to get to the bottom of this terrible act," Harper said.

One of the two soldiers died of his injuries in a hospital Monday night. The second soldier's injuries were described as less serious, but police were not able to provide an update on the individual's condition.

"Our CAF members represent the best of Canada," National Defence Minister Rob Nicholson said Tuesday, "and to have one die in a senseless act such as this only strengthens our resolve.

"We will not forget."

After the soldiers were struck Monday, police chased the driver more than four kilometres until his car flipped into a ditch. The man then exited his car, allegedly holding a knife, and police opened fire, seriously injuring him, said SÃ»retÃ© du QuÃ©bec Sgt. Joyce Kemp.

Rouleau was transported to hospital after he was shot, but police later confirmed he had died.

It was the first fatal attack on Canadian soil involving Islamic militants, and the first incident since Canada joined the battle against Islamic State fighters who have taken over parts of Iraq and Syria.

On social media, Rouleau went by the names Ahmad Rouleau and Abu Ibrahim AlCanadi, where he posted comments recently regarding the war in Syria and the rise of the Islamic State. He was described as a convert to Islam.

"This individual was known to federal authorities including our Integrated National Security Investigations team in Montreal who along with other authorities were concerned that he had become radicalized," the RCMP said in a statement Monday. The force declined further comment.

The suggestion the incident was an act of terrorism was first raised in a question posed by a Conservative MP to Prime Minister Harper.

Harper said during question period Monday he was aware of the "extremely troubling" reports and that authorities were investigating. The Prime Minister was briefed on the investigation by RCMP Commissioner Bob Paulson, Chief of Defence Staff Gen. Tom Lawson, and National Security Adviser Stephen Rigby on Monday.

The day after the attack, a soldier attached a dozen poppies onto a lamp post a few feet from where the men were struck.

Lt. Cpl. Stephane Dubois and a fellow soldier walked across the parking lot and got into a car while in uniform. Dubois said he is not afraid to wear his uniform in public, saying it is part of his service to his country.

"It is part of my job here and overseas," said Dubois, who has served in Afghanistan.