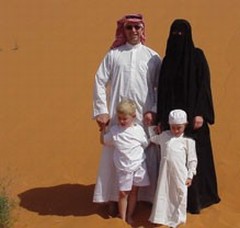 Saudi Arabia: never too young to get married...
Source: Winds of Jihad

Saudi girl, eight, married off to 58-year-old is denied divorce

An eight-year old Saudi Arabian girl who was married off by her father to a 58-year-old man has been told she cannot divorce her husband until she reaches puberty.

Lawyer Abdu Jtili said the divorce petition was filed by the unnamed girl's divorced mother in August after the marriage contract was signed by her father and the groom. "The judge has dismissed the plea because she [the mother] does not have the right to file, and ordered that the plea should be filed by the girl herself when she reaches puberty," lawyer Abdullah Jtili told the AFP news agency.

The case was handled by a court in Qasim province, north of the Saudi capital Riyadh. The girl does not know she is married, said Jtili, adding that he will appeal.

In many child marriages, girls are given away to older men in return for dowries or following the custom by which a father promises his daughters and sons to marriage while still children. But the issue is complicated by different interpretations of sharia law and a lack of legal certainty.

"There is confusion in Saudi Arabia over the fundamental question of what constitutes adulthood," said Clarisa Bencomo of Human Rights Watch. "There is also vast judicial discretion." The case appears to fit a pattern of divorced fathers using their children to take revenge against their ex-wives. Mothers usually only have custody while the children are young.

Relatives said the marriage had not been consummated and that the girl was still living with her mother. They said that the father had set a verbal condition by which the marriage was not to be consummated until the girl turns 18 - although it was unclear how this could be enforced. The father agreed to marry off his daughter for a dowry of 30,000 riyals (Â£5,400) as he was facing financial problems.

Bencomo dismissed the idea that the girl would be able to file for divorce once she reached puberty since there was no standard definition of this. In addition, Saudi judges often insist that even adult women speak to them through a male guardian or lawyer.

No figures are available for the number of arranged marriages involving pre-adolescents in Saudi Arabia, where the strictly conservative Wahhabi version of Sunni Islam holds sway and polygamy is common. But human rights groups say they are aware of many such cases.

Senior clerics, including Sheikh Abdul-Aziz Al-Sheikh, the kingdom's grand mufti, have denounced child marriage. But it is still prevalent in conservative areas. The Shura council recently defined adulthood as starting at age 18 but objections prevented it from being ratified as required by the council of ministers.