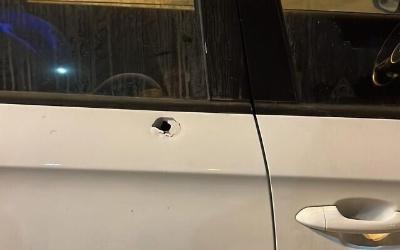 A bullet hole is seen on an Israeli car after it came under fire in the West Bank town of Huwara, September 19. 2022 (Rescuers Without Borders)

Shots were fired at an Israeli vehicle driving through the northern West Bank Palestinian town of Huwara before dawn on Monday, the military said.

No injuries were caused, but the car was slightly damaged in the attack.

The driver continued driving until he reached the settlement of Ariel and reported the incident.

The Israel Defense Forces said it launched a manhunt for the gunmen.

Huwara has long been a flashpoint in the West Bank as it is just about the only Palestinian town through which Israelis regularly travel in order to reach settlements in the northern West Bank.

Earlier this month, an Israeli man was lightly hurt in a similar attack while driving through the area.

Two Palestinian suspects were arrested last week over their alleged involvement in the shooting, and on Sunday morning, troops seized the guns used in the attack, the IDF said.

In recent months, Huwara has also become the battleground of a âflag warâ between Israelis and Palestinians, with each side taking down the otherâs national flags shortly after they are hung on the villageâs main road. IDF soldiers have also been filmed taking down Palestinian flags even though the portion of the road that runs through Huwara is located in Area B of the West Bank, which is supposed to be under the civilian control of the Palestinian Authority.

In a separate incident, the IDF said Palestinians opened fire at a military post near Nablus, without causing injuries.

The overnight shootings came at a time of rising violence.

Israeli troops have repeatedly come under gunfire during nightly raids in the West Bank, during a months-long effort against Palestinian terrorists. The military launched the operation after a series of deadly attacks that killed 19 people between mid-March and the beginning of May.

At least 98 Palestinians have been killed by Israeli forces so far this year, according to a tally from the PA health ministry.

According to the army most were armed Palestinians or ones whoâd carried out attacks, but the number also included some bystanders, among them teens who violently protested Israeli raids and veteran journalist Shireen Abu Akleh, whose death was deemed an accident by the IDF.

More than 2,000 suspects have been detained since the beginning of the year, according to the Shin Bet security agency.