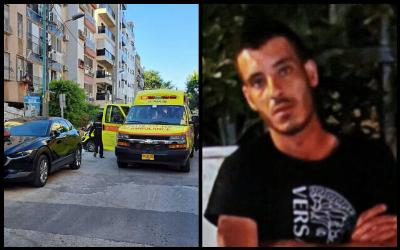 Left: The scene of the murder of an 84-year-old woman in Holon, September 20, 2022. (Magen David Adom); Right: The suspect in the attack, named by police as Mousa Sarsour of Qalqilya (Israel Police)

Israel Police chief Kobi Shabtai said on Tuesday night that the murder of an 84-year-old woman in Holon who was found dead with signs of trauma appears to be a terrorist attack.

The Shin Bet (Israel Security Agency) and Special Patrol Unit are involved in the investigation and Israel Police are searching the area for the suspect.

Security camera footage obtained by police shows a man dressed in dark clothing attacking the woman with an object in his hand.

"We're after a difficult attack. It appears at the moment that this was likely a terrorist incident," said Shabtai. "The suspect is known to us and we are currently searching near and far in order to locate the suspect."

Police identified the suspect as Musa Sarsur, a 28-year-old Arab from Kalkilya. Anyone who knows anything about his whereabouts should contact the police's 100 hotline. Sarsur entered Israel through the Eyal Crossing north of Kfar Saba on Tuesday morning on a work permit. The Shin Bet had not identified him as a security threat.

Prime Minister Yair Lapid responded to the suspected attack on Tuesday night, stating "Terrorism is the embodiment of pure evil. This is a shocking attack by a despicable and cowardly terrorist who murdered an elderly woman who could not fight him."

"The security forces are currently working to find the terrorist, and I trust them to lay hands on him. We will act hard against terrorism, we will catch the operatives and their senders. I send my deepest condolences to the murdered woman's family and strengthen them in their difficult time."

Following a wave of terrorist attacks in Israel

The incident comes amid a wave of terrorist attacks and attempted terrorist attacks in Israel and the West Bank in recent weeks. Earlier this month, a Palestinian was caught by police in Jaffa carrying a firearm and pipe bombs that he intended to use in a mass terrorist attack in Tel Aviv.

Earlier on Wednesday, shots were fired toward Border Police at the Salem Base along the Seam Line. In the afternoon, shots were fired again toward soldiers near the Seam Line near Faqqu'a in the northern West Bank. No injuries were reported in either incident and Israeli forces are searching for the perpetrators.