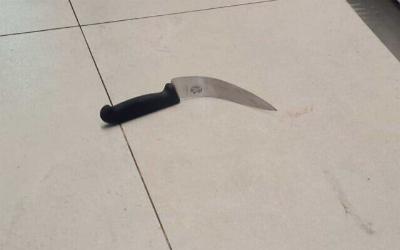 A knife used in a stabbing attack at the Jerusalem Central Bus Station on September 13, 2021. (Israel Police)

Two Israeli men were moderately injured in a stabbing attack at a store next to the Jerusalem Central Bus Station in Jerusalem on Monday. Two female Border Police patrol officers at the scene shot and wounded the terrorist.

The attacker was identified as 17-year-old Basil Shawamra from the village of Deir al-Asal al-Fauqa near Hebron in the southern West Bank. Two additional suspects were detained.

âWe will continue to act resolutely against any attempt to harm Israeli citizens,â said Defense Minister Benny Gantz after the attack. âThe vigilance and rapid and professional action of the forces on the ground prevented a much more severe result.â

The victims were evacuated to Shaare Zedek Medical Center where doctors said they were conscious and stable.

Israel Police Jerusalem District Commander Doron Turgeman told journalists there was âno doubtâ that there is an escalation of violence taking place, stressing that police are prepared for any situation.

âThe deployment and fast response [of police] together with determination and exercises conducted in Jerusalem every day led to the quick neutralization of the terrorist and the prevention of additional lives being endangered,â said Turgeman. âAn excellent response by the officers.â

The attacker underwent surgery at Shaare Zedek after resuscitation attempts.

Gantz wished the victims a speedy recovery and praised the Border Police officer who shot the terrorist, as well as the IDF soldiers who thwarted a terrorist attack earlier in the day at the Gush Etzion junction.

Magen David Adom paramedic Shlomi Pinchas described the scene in the capitalâs thoroughfare, saying: âWe arrived at the scene and there was a big commotion. The two wounded were lying conscious and suffering from stab wounds. We provided them with advanced medical care in the field that included bandages, stopping the bleeding and medication, and quickly evacuated them to the hospital as they were in moderate condition.â

Hamas praised the stabbing attack on Monday, saying: âThe escalation of stabbings in occupied Jerusalem, the shootings, the increasing confrontations of popular anger in the West Bank and the demonstrations in Gaza, come within the framework of the freedom intifada launched by our Palestinian people in solidarity with the heroic prisoners and confronting the brutality of the occupation against them.

Palestinian Islamic Jihad spokesman Daoud Shehab also responded to the terrorist attack on Monday afternoon, saying: âThe commando operations in Jerusalem and the West Bank reflect the extent of the rising popular anger as a result of the aggressive policies of the occupation against the prisoners.â

Shehab warned that Israel would âpay a price for its arrogance,â adding that, âActs of resistance are a legitimate right of the Palestinian people, and we bless and support this jihadist act and salute all the revolutionaries in Jerusalem, the West Bank and everywhere â and we affirm that resistance is the most capable approach to deterring the occupation.â

The attack came just hours after an attempted stabbing attack at the Gush Etzion junction, in which IDF soldiers stopped a terrorist who attempted to stab them. That attacker was also taken to Shaare Zedek Medical Center with gunshot wounds to his hand. No soldiers were injured in the attack.

Opposition leader Benjamin Netanyahu said the terrorist attack in Jerusalem was the direct result of Prime Minister Naftali Bennett defying a police recommendation and ending the closure on Judea and Samaria.

âWhile Bennett is in Egypt giving more gifts to the Palestinians and returning them to the international agenda, his failed government is [allowing] a thousand deaths from corona, terrorists escaping from prison and the murder of Barel Shmueli, firing on the South and the return of terror to our streets,â Netanyahu said.

Netanyahu also criticized Gantz, accusing him of displaying weakness. His criticism of the defense minister was interpreted as a sign that Netanyahu had given up hope of forming a government with him in the current Knesset.