U.N. Inaction on Libya
All Actions of the UN Human Rights System Critical of Specific States, 2011 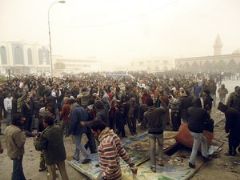 Photograph by: STR
Credit: REUTERS
Libyan people take part in a protest in the seaport city of Tobruk February 20, 2011.
More than 560 people have been killed in Libya since the unrest began, according to estimates by the opposition. About 1,400 people were still missing, broadcaster Al Arabiya reported Tuesday.

The streets of Libya's capital are littered with the bodies of scores of protesters shot dead by security forces loyal to Muammar Gaddafi, an opposition leader has said.

Mohammed Ali of the Libyan Salvation Front said Tripoli's inhabitants are hiding at home after the killings and warnings by forces loyal to Mr Gaddafi that anyone found outside would be shot.

Deep rifts have opened in Mr Gaddafi's regime, with Libyan government officials at home and abroad resigning, air force pilots defecting and a bloody crackdown on protest in the capital of Tripoli, where cars and buildings were burned.

World leaders expressed outrage at the "vicious forms of repression" used against the demonstrators. The longest serving Arab leader appeared briefly on TV to dispel rumours that he had fled.

Sitting in a car in front of what appeared to be his residence and holding an umbrella out of the passenger side door, he told an interviewer that he had wanted to go to the capital's Green Square to talk to his supporters, but the rain stopped him.

"I am here to show that I am in Tripoli and not in Venezuela. Don't believe those misleading dog stations," Mr Gaddafi said, referring to the media reports that he had left the country. The video clip and comments lasted less than a minute - unusual for the leader, who is known for rambling speeches that often last hours.

Pro-Gaddafi militia drove through Tripoli with loudspeakers and told people not to leave their homes, witnesses said, as security forces sought to keep the unrest that swept eastern parts of the country - leaving the second-largest city of Benghazi in protesters' control - from overwhelming the capital of two million people.

Mr Gaddafi's security forces have unleashed the bloodiest crackdown of any Arab country against the wave of protests sweeping the region, which toppled leaders of Egypt and Tunisia. At least 233 people have been killed so far, according to New York-based Human Rights Watch.