U.N. Inaction on Ukraine
All Actions of the UN Human Rights System Critical of Specific States, 2014 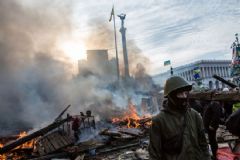 Anti-government protesters walk amid debris and flames on February 19, 2014 in Kyiv, Ukraine

A short-lived truce crumbled Thursday as gunfire erupted at Independence Square, the center of anti-government protests and an increasingly violent crisis that threatens catastrophe for this divided nation.

As protesters fortified barricades and some tried to dodge apparent sniper bullets, Western leaders denounced the violence. Russia's United Nations ambassador accused the opposition of trying to stage a coup.

The head of the protesters' medical service said 100 people died and 500 were injured in clashes on Thursday, just hours after the government declared a truce in fighting that had shocked world leaders with the deaths of 28 people two days before.

The Ukrainian government has not released its own casualty figures, but Interior Minister Vitali Zakharchenko said 25 police officers had been wounded and an unspecified number of them had died. Some others had been taken hostage, he said.

If Thursday's death toll is confirmed, it would make it the deadliest day in Ukraine since protests began.

The violence inflames a crisis that started in November, when President Viktor Yanukovych reversed a decision to sign a trade deal with the European Union and instead turned toward Russia. Ukraine has long been divided between historic loyalties to Europe and its eastern neighbor.

Western foreign ministers were in Kiev Thursday trying to find a solution, and Russia said it will send a mediator there at Yanukovych's request to negotiate with the opposition. But the Russian ambassador to the U.N., Vitaly Churkin, said his government doesn't believe the opposition wants a dialogue. He accused protest leaders of invading government facilities as a buildup to a takeover of parliament.

"We think that this attempt to execute a violent coup should stop," he said.

In a statement, the White House said it was outraged by images of security forces firing on protesters and urged those forces to withdraw and "respect the right of peaceful protest." It's unclear what prompted Thursday's clashes. CNN crews at the scene reported that as security forces were moving away from the area, a group of protesters pursued them throwing rocks and Molotov cocktails.

Zakharchenko said the violence had been "provoked exclusively by the opposition leaders," echoing an earlier statement from Yanukovych's office accusing protesters of breaking the truce.

"The opposition used the negotiation period to buy time, to mobilize and get weapons to protesters," the statement from the President's office said.

However, a doctor volunteering to treat protesters, Olga Bogomolets, accused government forces of shooting to kill, saying she had treated 13 people she believed had been targeted by "professional snipers."

"They were shot directly to their hearts, their brain and to their neck," she said. "They didn't give any chance to doctors, for us, to save lives."

CNN could not independently confirm Bogomolets' claim of sniper fire.

At a hotel converted into a triage center, bodies covered in bloodied sheets lay on the floor. Orthodox priests prayed over them.

In a statement that appeared to increase pressure on protesters, the Interior Ministry said it reserved the right to use force to free about 70 police officers it said had been taken hostage Thursday by protesters.

Diplomatic efforts under way
European Union officials have spoken about the possibility of sanctions against the Ukrainian government, which could include freezing assets and restricting the visas of officials deemed responsible for violence in that country, French Foreign Minister Laurent Fabius said on Twitter.

He was in Ukraine's capital Thursday, along with foreign ministers from Germany and Poland, meeting with various opposition leaders and Yanukovych. The talks stretched out longer than expected, and a German foreign ministry spokeswoman told CNN those ministers would not be able to immediately join other EU diplomats already meeting Thursday in an emergency session in Brussels on the situation in Ukraine.

"The ongoing attempts to obtrusively intervene from outside, threat with sanctions or trying to influence the situation in any other ways are inappropriate and can't lead to anything good but can only aggravate the confrontation," the report quoted spokesman Aleksandr Lukashevich.

As the protests continued, anger over the rejected trade deal with the EU morphed into resentment of Yanukovych, his closeness to Russia, and the power he wields.

The violence caused political fallout in the President's own party and elsewhere. Kiev Mayor Volodymyr Makeenko announced his resignation from the country's ruling party, according to the city administration website. The same post also announced that the city's metro transit system is reopening. Government officials had closed the system to prevent protesters from reaching Independence Square, also known as Maidan.

Thursday's violent developments came just hours after Yanukovych announced a truce -- and opposition leaders agreed to abide by it.

Opposition leader Vitali Klitschko, a former world-class boxer, met with Yanukovych Wednesday -- discussions that led to the truce. They were expected to meet again Thursday, but it was unclear if that meeting would still happen after the most recent violence.

Senior officials in U.S. President Barack Obama's administration told CNN Wednesday they were bracing for Ukraine to intensify its crackdown under pressure from Russia.

"Things have gotten very bad," one official said. "The government is speaking in very nasty, aggressive and confrontational terms. It signals they are prepared to do something." Analysts warned there was little that outside pressure could do, especially if the Ukrainian military gets involved on the side of the government cracking down on protesters.

"My own hunch," said Council on Foreign Relations President Richard Haass, "is this is going to continue to escalate."