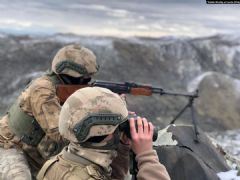 The burns on the screaming child brought into the Syrian-Kurdish hospital at Tal Tamir were enough to reduce even hardened medical staff to silence yesterday.

Yet the terrible wounds that had all but flayed the 13-year-old Mohammed Hamid Mohammed's skin from his torso, penetrating deep into his flesh, suggested his injuries were caused by something far worse than blast alone. They added to the growing body of evidence that suggests Turkey, a Nato member, is using white phosphorus against Kurdish civilians in its eight-day offensive into northern Syria.

In recent days Turkey had intensified its attack on the Kurdish held city of Ras al-Ain in the lead-up to the announcement of a 120-hour ceasefire deal brokered with Mike Pence, the US vice-president, last night. Its forces have repeatedly been accused of using white phosphorus in civilian areas. The boy suffered the burns after a Turkish airstrike on his town at midnight on Wednesday, according to his father.

"This very much looks like it was caused by white phosphorus," said Hamish de Bretton-Gordon, a British chemical weapons expert, after being shown photographs of the child's burns.

"In 24 hours I have been shown more photographs of these kinds of burn than at any recent stage in Syria's war. White phosphorus is a horrific weapon, which can be delivered by aircraft or artillery. It reacts to the moisture in the skin in a way that intensifies its burning, so that water cannot put it out."

Kurdish leaders have accused Turkey of using the chemical, which is banned for use on civilian targets by the Geneva and Chemical Weapons conventions.