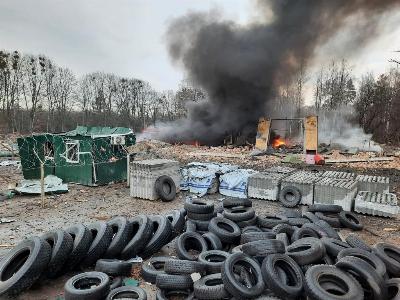 Five of the victims of the attack in the eastern town of Chaplyne burnt to death in a vehicle, officials said. Two boys aged six and 11 were also killed.

"As a result of a direct hit by an Iskander missile on a military train at the Chaplyne railway station in the Dnipropetrovsk region, more than 200 servicemen of the reserve of Ukraine's Armed Forces and 10 units of military equipment were destroyed, on their way to combat zones in the Donbas," its defence ministry said in a statement.

Ukraine has made no mention of military deaths in the strike.

Mr Zelensky said he had learned of the strike on Chaplyne, in the Dnipropetrovsk region, as he was preparing to speak to the Security Council, adding: "This is how Russia prepared for the UN Security Council meeting."

In April, a strike on another train station killed more than 50 people. Ukraine spent Wednesday marking its annual independence day. Mr Zelensky had previously said Russia might do something "cruel" to disrupt the celebrations.

Earlier, he accused Moscow's forces of turning the Zaporizhzhia nuclear plant into a "war zone" that endangered the plant and the people of Europe, putting the world "on the brink of radiation catastrophe".

On Thursday the city of Enerhodar, where the plant is located, was "on the verge of a humanitarian disaster" after being left without electricity and water "as a result of enemy shelling", its exiled Mayor Dmytro Orlov said on Telegram.

It is not clear whether these outages have affected the nuclear plant. Russian media reported quoting Russian-installed authorities that the occupied cities of Melitopol and Kherson, and other population centres in Kherson region, were without power.

Around the world, there were gatherings of supporters in the streets on Wednesday to mark Ukraine's independence. World leaders also rallied to support the embattled nation.

UK Prime Minister Boris Johnson appeared in Kyiv on an unannounced trip to show his country's support, announcing Â£54m ($63.5m) in new military aid - a figure dwarfed by an announcement from US President Joe Biden of an extra $3bn (Â£2.5bn).

But in the streets of Kyiv, it was relatively quiet.

Ukraine had banned large gatherings and events over fears that Russia could target such civilian gatherings. It followed a warning from the US for any of its citizens to leave ahead of the anniversary.

Some gathered anyway on Khreshchatyk Street to look at the array of captured Russian tanks and armoured vehicles put on display instead of the usual Ukrainian parade.

Between his political speeches, President Zelensky and his wife also attended a memorial ceremony for the fallen soldiers and civilians of the war, laying yellow and blue flowers at Kyiv's Memory Wall of Fallen Defenders.