U.N. Inaction on Morocco
All Actions of the UN Human Rights System Critical of Specific States, 2013 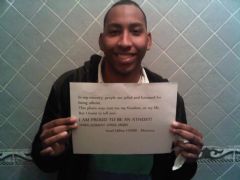 Writings from the Council of Ex-Muslims

COUNCIL OF EX-MUSLIMS OF MOROCCO: THE FIRST PUBLIC ATHEIST ORGANIZATION IN COUNTRY WITH STATE RELIGION OF ISLAM

Morocco's state religion is Islam. Whilst Article 3 of the Constitution guarantees freedom of religion, atheists and unbelievers are not recognised. Though apostasy is not a prosecutable offence in the Penal Code, "incitements in order to shake the faith of a Muslim" are. Apostates and atheists face harassment, threats or imprisonment if they speak out.

In order to break the taboo that comes with renouncing Islam and take a stand for atheism, reason, universal rights and secularism, we call on all non believers, atheists and ex-Muslims to come forward to establish the Council of Ex-Muslims of Morocco, the first public atheist and non-religious organisation in a country with Islam as its state religion.

1. Universal rights and equal citizenship for all. We are opposed to cultural relativism and the tolerance of inhuman beliefs, discrimination and abuse in the name of respecting religion or culture.

3. Freedom of and from religion.

4. Separation of religion from the state and legal and educational system.

5. Prohibition of religious customs, rules, ceremonies or activities that are incompatible with or infringe people's rights and freedoms.

6. Abolition of all restrictive and repressive cultural and religious customs which hinder and contradict woman's independence, free will and equality. Prohibition of segregation of sexes.

7. Prohibition of interference by any authority, family members or relatives, or official authorities in the private lives of women and men and their personal, emotional and sexual relationships and sexuality.

8. Protection of children from manipulation and abuse by religion and religious institutions.

9. Prohibition of any kind of financial, material or moral support by the state or state institutions to religion and religious activities and institutions.

10. Prohibition of all forms of religious intimidation and threats.

LEAVING ISLAM IS NOT A CRIME

Morocco's High Council of Ulemas (the highest government religious institution headed by the King) has issued a fatwa decreeing the death penalty for Moroccans who leave Islam. Currently, under Morocco's penal code, those who impede or prevent worship face imprisonment and fines.

An attack on apostates is clearly a response to the establishment of the Council of Ex-Muslims of Morocco â the first public atheist organisation in a country with Islam as the state religion.

The Council of Ex-Muslims of Britain reminds the government of Morocco that the right to religion has a corresponding right to be free from religion.

Leaving Islam is not a crime; issuing death fatwas against people, however, is.

We call on the Moroccan government to cancel the fatwa, guarantee the security of apostates and freethinkers and prosecute those who threaten citizens with death.

We call on the public to defend the Council of Ex-Muslims of Morocco and the right to atheism and renouncing Islam.

YOU BETTER NOT TOUCH HIM

In the email, he said:

My Father has been interviewed by secret agents at work, they asked him about my activities, my beliefs, my relations and if some foreigners visit me, and they told him that I have to stop, and that I am considered an enemy of the country by showing bad things about it ... and [that] it is the last warning before they react.

Since then, he has gone into hiding after security officials raided a home to possibly arrest him.

I would like to thank everyone who supported me, asked about me by any mean! Those whom I didn't reply didn't add me as a friend, as I am blocked, I couldn't reply at them! Thank you All, you made me so proud of being part of this big and united family of rational and free thinkers!

Whatever my fate will be in the next hours, the next days, the next weeks; killed, beaten, jailed, or anything else, I am not sorry for what I have done since I became an activist few years ago, I have shared with many people here thoughts and ideas, and so many awesome memories.

Both police and people are looking for me, I have nowhere to go, my life is at high risk... However, I am Happy, because I am not the only one fighting for a better world, I hope I will be the last man persecuted because of Dogmatisms, Religions, or Myths.

Whatever I'll be, KEEP FIGHTING, I love you all.

PS: There is no god but Minnie Mouse.

The Council of Ex-Muslims of Britain unequivocally condemns efforts of the Moroccan government to silence Imad. Rather, the government should be prosecuting those who threaten Imad and apostates with death, including members of Morocco's High Council of Ulemas who recently issued a fatwadecreeing the death penalty for Moroccans leaving Islam.

This is our final warning to the Moroccan Government. Hands off Imad, prosecute those who threaten and incite murder, and respect freedom of expression and thought.

The Council of Ex-Muslims of Britain calls on all to condemn the Moroccan government and defend Imad.