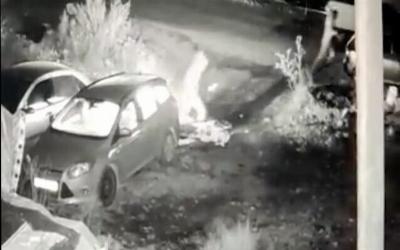 A car belonging to a Jewish resident of East Jerusalemâs Sheikh Jarrah neighborhood was torched Sunday night, amid rising tensions in the flashpoint area.

Security camera footage of the incident showed a masked suspect hurling a rock at the carâs back window before another tosses what appears to be a Molotov cocktail into the vehicle.

A fire can then be seen in the car as the suspects run away.

According to the Walla news site, the owner has had his car set ablaze seven times since the start of the year.

The news site also reported that Molotov cocktails were thrown Sunday at homes of Jews on the outskirts of Beit Hanina, another Arab neighborhood in East Jerusalem.

The incidents came after a group of masked suspects vandalized several cars owned by Palestinians near Sheikh Jarrah overnight, before fleeing.

There were no reports of injuries in any of the incidents, nor the arrests of any suspects in connection to Sundayâs incidents.

âWe will continue to act against violence of any type, rioting or acts of vandalism in the area and in general,â police said.

Last week, an Israeli Jew living in Sheikh Jarrah was stabbed as she accompanied her five children to school. Video released by police showed the attacker appeared to be a young girl.

A 14-year-old Palestinian girl, apparently a neighbor of the victim, was arrested under suspicion of being the assailant. The teenager denied any connection to the attack, her lawyer, Mohammad Mahmoud, told The Times of Israel.

Sheikh Jarrah, a neighborhood a 10-minute train ride away from Jerusalemâs city center, has emerged as a symbolic flashpoint in the Israeli-Palestinian conflict. Over the past few years, a handful of Jewish nationalists have moved into the mostly Palestinian neighborhood, mostly through complex eviction cases.